Unique abilities are passive abilities that work as long as a Hero is being used on a team.  While every Hero has a passive ability, not all of them will be effective if the Hero either not being attacked or not being used in play.  Some Heroes have passive skills that work when they are placed in the Sub slot (the fourth and furthest right-side slot when choosing a team).  These Heroes are great to use for the Sub because you really only need to focus on getting their Unique abilities unlocked and you don’t need to worry as much about gear as long as your primary team can sufficiently defeat your enemy.

In order to unlock a Hero’s passive ability, you need to get their CC at least above 16k and complete the single battle to unlock their Unique ability.  You will know when you’re high enough to complete this challenge when the lock symbol over the Unique ability starts glowing. 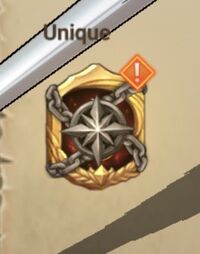 These battles will usually have some tie-in to the Anime and will require the Hero to battle three enemies.  The Hero has to fight completely alone, but if you win the battle then you will have unlocked the Unique ability.

These passive abilities can affect:

Heroes that affect specific Affinities are really useful to use in the Training Grotto since you’ll generally want to use all (or mostly all) of one Affinity to beat a given Goddess Amber.

These Heroes are really useful to use when the Knighthood boss or event challenge requires you to use Heroes from a specific race.