Floor 9 protects the boss by having him only receive damage from the third skill use of the same enemy.  Reflect is disabled on this floor, and Attack is increased by 10% each turn. 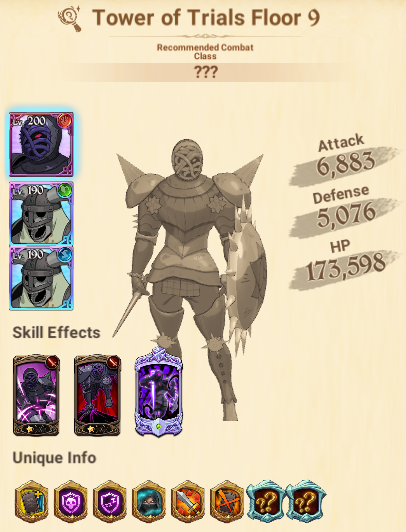 Floor 9 requires using units whose skill use also increases their multiplier since the boss will only receive damage from the third skill use of the same enemy.  Red Purgatory Ban is a great unit to stack buffs with since his HP buff can be used to substantially increase the damage that he is able to deal.

Other viable high DPS units to use for floor 9 are:

Great support units to use for floor 9 are:

For the sub slot, Green Deathpierce is the best option since he is able to decrease the enemies’ Crit Resistance and Crit Defense.  If using a mono red team with Reg Purgatory Ban, Red New King Arthur, and Red Howzer, then Red Twigo is a great sub slot unit since he will increase the HP of his Strength allies.