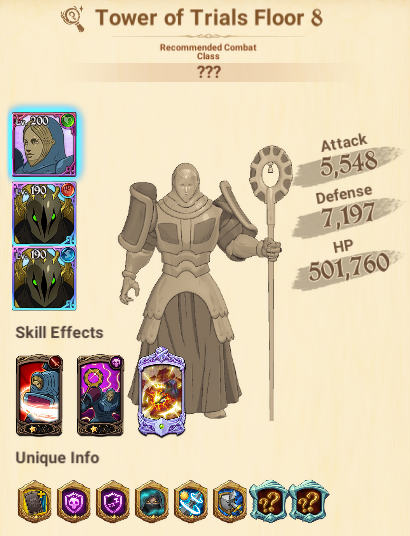 To beat floor 8, it is recommended to bring a mix of demon and human units to increase the amount of damage that is dealt to the side enemies next to the boss. It is important to use only high DPS units when attacking Ruin, or he will heal back his HP in full if less than 70% of his maximum HP damage is dealt. Use support units to build up the multiplier of your damage dealer to ensure the most damage is dealt.

Some great damage dealing units to use on floor 8 are:

Recommended support units for this floor are:

For the sub slot, Green Deathpierce is the best option since he is able to decrease the enemies’ Crit Resistance and Crit Defense.  Green Merlin is another viable option since she grants +1 Ultimate Move Gauge orb at the start of the battle.