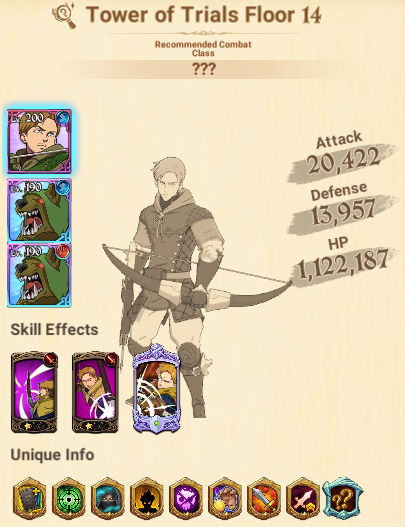 An optimal team to use on Floor 14 is Green Assault Mode Meliodas, Red Sigurd, Green Festival Zeldris, and Blue Nanashi. Green Assault Mode Meliodas and Green Festival Zeldris both have high Crit Defense values to begin with, but using Crit Defense food will help to boost Meliodas’s Attack by taking advantage of the stage’s attribute. Zeldris also serves to boost the allies’ stats as they are debuffed. Nanashi’s passive in the sub-slot applies a buff to all allies with two or less skill cards to increase their max HP, Crit Resistance, and Crit Defense. This also reduces the attacking enemy’s Ultimate Move Gauge by one orb, but the primary benefit for this floor is the increased Crit Defense.

Lastly, another viable alternative team is to use use a Fairy King Harlequin team with Green Gowther, Red Kyo, and Green Zeldris.