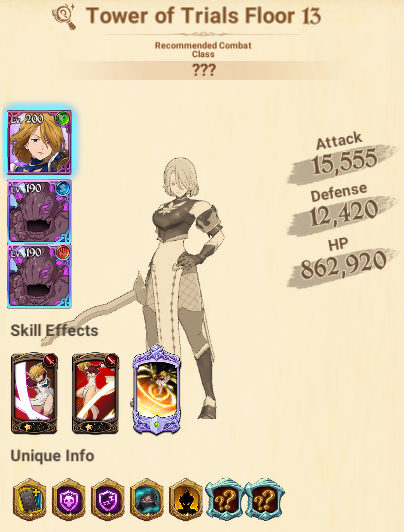 The optimal strategy for Floor 13 is to use a team with Blue Nanashi, Red or Green Gowther, Green Monspeet, and Red Elizabeth. This is because Nanshi and Monspeet both have skills that use the Delete effect, and using skills against Jillian that have the Delete effect will substantially increase their basic stats. Both require either Rank 2 or Rank 3 in order to take advantage of the Delete effect, so Gowther is used to rank up their skills. Elizabeth’s passive in the sub-slot helps to heal her allies without requiring her to be on the field. Due to Jillian’s high CC, units need enough HP to be able to survive the initial attack as they likely won’t be able to attack until after Jillian attacks first. Green Deathpierce can also be used in the sub-slot instead of Red Elizabeth.