Upon entering the Tavern, there are a number of different interactions that can be performed with various Tavern employees.

Meliodas is the playable character while you walk around the Tavern.  Using Meliodas, you can pour ale, check the jukebox, serve ale, clean the table, or eat a dish.

Checking the jukebox has no benefit to your heroes other than Meliodas Affection, but it allows you to listen to other fun music that is available.

Pouring ale, which is done at the keg by the window, gets you a Vanya Ale for your inventory each time that you pour, and also grants you Meliodas Affection once daily.  Vanya Ale can be fed to heroes for increased Affinity. 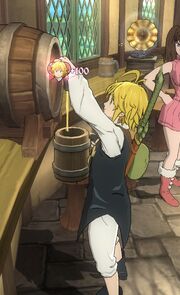 Eating a dish is done while sitting down at a table, and helps grant boosts, although you can also do this directly from the preparation screen pre-battle.

Every day that you visit your Tavern, Elizabeth will have a daily gift for you.  Depending on what events are going on, she may have more than one gift.  Note that if you are in the part of the storyline where you need to evolve Gowther, he will appear in your Tavern instead of Elizabeth.  Once you are done with this quest, she will return.  Elizabeth can also be chatted with once daily to increase Affection.

When Elizabeth is present, you can walk up close to her and enter Gyro Mode, as shown below. 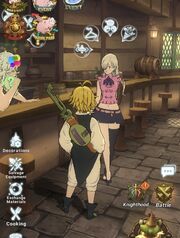 In Gyro Mode, this is an AR-type view where you can walk around the Tavern as if you are really there.  More importantly, if you point your camera towards the door you will see a flight of stairs on the right side that you can climb.

Upon climbing the stairs, you can visit various shared bedrooms for the Sins.  While visiting these rooms you may see sparkles on some of the items around the rooms.

Clicking on or pointing your camera at these spots and holding still will allow you to open the secret item, which is generally Gold coins.

In Ban and King’s room on the second floor, you will find Hellbram’s helmet on one of the chairs.

Oftentimes this will give you a Vaizel Fight Festival entry ticket instead of Gold!

Cooking is performed while interacting with Ban.  Here you can also learn new recipes to make or make versions of recipes that you have already unlocked.  Producing the same recipe multiple times will increase its level, which increases the amount of Gold earned when recipes are registered with Hawk.  Ban can also be chatted with to increase Affection once daily.

The most efficient way to earn awakening stones from Diane is to enhance your SR gear to +1 and your SSR gear to +5 before salvaging gear. Also, take advantage of Salvage Rate Up events!

In typical lovestruck fashion, King will be hanging out near Diane’s window.  When interacting with King, you can exchange materials to higher or lower grade, or comparable grade of other similar items.  Materials that can be exchanged are Grimoires of Speed, HP, and Strength, Water of Life, Demon’s Blood, Hero Enhance Potions, and Equipment Awakening Stones.  King can also be chatted with to increase Affection once daily.

One of Hawk’s interactions is to purchase decorations, which grant Tavern Effects. 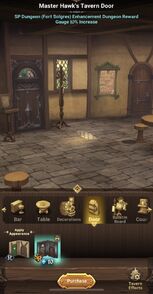 These decorations need to be purchased using Diamonds, but they give great bonuses, as shown on this Decorations table.

Additionally, you can periodically calculate Sales from registered Recipes by visiting Hawk.  The more that you cook with Ban of a given Recipe, the higher its level will be, and the more Gold that it will earn upon sale.

Merlin becomes available in your tavern only after Episode 115. Equipment may be engraved with Merlin to make them into higher tiers. Merlin can also allow you to fuse spare Awakening materials to create Full Awakening Tokens.

Last but not least, it is important to routinely check for visitors in the Tavern.  The visitors’ board by the Tavern door will tell you who will be next appearing.  Interacting with these visitors will grant Affection, similar to the visitors that are seen inside of villages.

Once-daily, the upcoming visitor can be changed out to Veronica for free.  Interacting with Veronica grants 10k Gold, a gift of a meal (typically one that cannot be cooked by Ban), and also a 60-minute buff that can be used to increase Gold when selling to any shop in a specific town. Veronica appears as a guest after beating Chapter 3 Episode 25 (Capital of the Dead). Her buff becomes applied at all times after Chapter 7 Episode 122 (Druid Sacred Lands) and she can no longer be invited as a guest after this point.