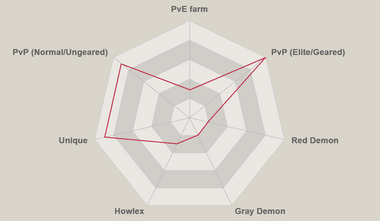 [Elite Demon] Zeldris of Piety is the leader of the [Ten Commandments].  He is Meliodas’s brother and has a very similar appearance and physique.  He is one of the best heroes for use in PvP, especially when paired with other Commandments.  He’s great at countering opponents who are trying to Ult Rush, because he can decrease their Ultimate Move Gauge orbs through his Commandment and skill, and because he will disable recovery skills.

Red Zeldris’s Unique ability is called “Leader of [The Ten Commandments]”, and increases all allies’ basic stats by 6% for each ally or enemy with a Commandment.  This makes him useful when paired with other Commandments, but also when countering an opponent who is utilizing a Commandment.  Using him in a team with both Green Estarossa and Red Derieri can be extremely effective in ungeared PvP.  Another viable option is to use him with Blue Melascula as she’ll become very tanky against Ult Rush.

Lastly, as he is the Commandment of Piety, Red Zeldri’s Commandment will deplete one orb from the Ultimate Move Gauge and remove Debuffs whenever a skill is moved.  This applies to both allies and enemies as soon as Red Zeldris enters into battle, with the exclusion of Death Matches.  This is primarily useful in PvP since PvE enemies won’t move skills around.  Using Red Zeldris in PvP will help with preventing your opponent from being able to Ult Rush any of their own heroes, although keep in mind that the same will apply for your own heroes.

Red Zeldris’s primary area of use is in PvP (both geared and ungeared).  His skills and Commandment make him extremely useful for preventing an opponent from being able to Ult Ruth or use recovery skills.  Both when paired with and when countering a team that contains another Commandment, he becomes even more effective, with a 6% increase of all allies’ basic stats for each ally or enemy with a Commandment in play.

His Commandment of Piety will have limited beneficial use in PvE because it depletes orbs whenever cards get moved around.  Since PvE enemies can’t move cards, this means that the only effect will be felt on your own movements, so if you are going to use Red Zeldris in any PvE team, then make sure you are not moving cards around to attempt to rush an Ult for any team members since Red Zeldri’s Commandment will negate that effort.

Zeldris is an elite warrior of the Demon Clan, serving directly under the Demon King as the leader and Piety of the Ten Commandments. He is also the younger brother of Meliodas, as well as the youngest son of the Demon King, whom Zeldris also serve as representative and executioner.

According to Meliodas, due to having being lent the magic power of the Demon King, Zeldris' power can equal that of the Demon King and Supreme Deity, and that he has the power to remove the curse on him and Elizabeth.