Terry Bogard is a collab unit from the second run of the collaboration event from King of Fighters. Terry is the main protagonist from the game Fatal Fury: King of Fighters. He is nicknamed “The Legendary Wolf” and “South Town Hero”. His personality is incredibly charismatic, cheerful, and friendly to everyone around him. His younger brother, Andy, is his fiercest rival but he is extremely respectful of his brother.

Terry is introduced to the world of Seven Deadly Sins through Rugal’s invitation to Terry and Iori for the grand opening of a new arena, a Fight Festival in the newly renovated Vaizel. Iori Yagami challenges Terry to prove that he is a wolf and not a mutt and the two face-off with each other before teaming up to resolve Rugal’s hijinks.

Rising Tackle -  Terry’s attack skill is similar to Red Awakened Eastin’s in that it depletes Ultimate Move Gauge orbs from a single enemy upon being attacked. This can be useful when countering Ult Rush teams.

Crack Shoot - Terry’s Counter skill is similar to Blue Old Fart King’s. His Stance increases the damage that he can deal out but also inflicts damage via counter any time an ally is attacked while his Stance is applied. This skill is particularly useful when his Holy Relic is equipped because his Holy Relic applies whenever a Stance skill is used.

Ultimate Move: Power Geyser - At the time of his release, Terry was the first unit with an AOE Power Strike ability (all other units with Power Strike skill attack a single target only). This allows him to deal incredible amounts of damage against his enemies.

Unique: Nice Guy - Terry’s Unique ability applies at the start of the allies’ turn in PvP and applies a debuff effect on the enemy with the highest remaining HP. This debuff effect decreases all stats of that enemy unit by 20% for one turn.

Red Terry excels in PvP (both geared and ungeared) due to his Unique ability, Counter stance, and AOE Ultimate Move.

Terry’s Holy Relic, the Stone Gauntlets of the Jotunn, was available for free crafting during the King of Fighters collab event. This Holy Relic provides a stat increase of 250 Attack, 500 Defense, and 1750 HP. When his Holy Relic is equipped, Terry removes all Debuffs from himself and increases all stats by 20% for two turns every time he uses a Stance skill.

Another good use for Red Terry is against the Crimson Demon (Howlex). This can be done by pairing him with either Red Gowther and Red Arthur or Red Sariel and Red Gowther.

Terry can also be used to beat Hraesvelgr by using a team with Halloween Matrona, Green Halloween Gowther, and either Festival Ludociel or Red Sariel. He is viable for this team composition because of his Counter skill, but this does rely on a bit of RNG to beat Phase 4. Ideally, you should enter Phase 4 with at least one Rank 3 Counter card to be able to clear the stage. Terry’s Holy Relic must be activated before entering in order to increase the damage cap when using his Stance skill.

Optimal gearing for Terry is to apply HP-Defense in order to assure he stays alive to utilize his Counter stances and Unique ability in PvP. 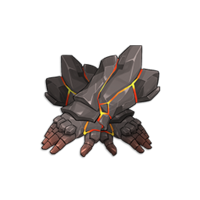 Stone Gauntlets of the Jotunn

Terry Bogard is the main protagonist of the Fatal Fury series. He has appeared in every Fatal Fury and King of Fighters game, and is one of the characters of choice to symbolize the company in crossover games, merchandise and publicity. He appears to fit many Japanese stereotypes for an American character in appearance, personality and speech (his in-game vocabulary is usually limited to American colloquialisms, such as "Okay!" and "Hey, c'mon, c'mon!").

Terry Bogard is the brother of Andy Bogard. Both of them were orphans adopted by Jeff Bogard. He is often referred to as the "Legendary Hungry Wolf" (from Garou Densetsu, meaning "Legend of the Hungry Wolf"). He has a pet monkey named Ukee (the previous mascot of SNK before Terry). He has a knack for scoring in basketball, which explains the creation of his Power Dunk move. His official nickname is "The Legendary Wolf" and "South Town Hero".