[The Four Archangels] Sariel of Tornado

Draw Hero
Red Sariel uses a skill which inflicts greater damage the higher the enemy's Resistance. This makes him effective against enemies with high Defense-related stats.

Sariel is one of the Four Archangels from the Goddess Clan and is a commander of Stigma alongside Ludociel and Tarmiel.  Stigma was an alliance formed between the Goddess Clan, Giant Clan, and Fairy Clan, with humans joining later on, to battle against the Demon Clan 3,000 years ago during the first Holy War.  After the Demon Clan’s seal is broken, the four Archangels (without Mael) found human vessels to inhabit and reform Stigma with the Giants, Fairies, the Seven Deadly Sins, and the Kingdom of Liones.  Due to his involvement in both Holy Wars, Sariel has Associations with Elizabeth (for fighting alongside her in both wars) and Derieri (for helping to purify her when she became an Indura in the first Holy War).  Along with the Goddess Clan, Sariel lost his physical body in order to seal the Demon Clan at the end of the first Holy War.  He ends up possessing the body of Solaseed, a young woman who is dying of an incurable disease that he cures in exchange for her letting him use her body to fight the demons.

Sariel possesses the Grace of Tornado, which allows him to control the wind (similar to Howzer’s magical ability Tempest).  He is able to produce powerful gusts of wind to slice through or blow people away or create a wind-like sphere around him that he uses for defensive purposes to shred anyone who is trying to get close to him.

His AoE card, Sharp Wind, deals Sever damage, which gives a 3x chance of Critical Chance.  His Ultimate Move, Twin Wind Blade, also  Both of these are made even more effective in combat due to his Grace of Tornado, which ignores 50% of the enemy’s Critical Defense if his skill use results in a Critical Strike.

Last, but not least, Red Sariel’s Unique ability increases Goddess allies’ basic stats by the value equal to 20% of the hero’s own basic stats, which applies when he enters into battle.

Red Sariel’s primary area of excellence is in ungeared and geared PvP.  He also can be used for Howlex and the Red Demon, but he excels in PvP due to his Grace of Tornado.

For gearing Sariel, it is best to have at least a few pieces of Crit Damage equipment, which can be obtained from the Vaizel Fight Festival PvP shop (Congeniality pieces).  This will increase his Crit Damage, which will grant him a higher chance of having a Critical Strike.  When this happens, his Grace of Tornado goes into effect, which ignores 50% of the enemy’s Critical Defense.  At the time of his release, Red Sariel is presently the only unit that is able to ignore the enemy’s Critical Defense. 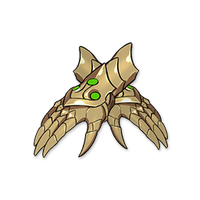 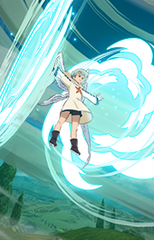 At some point of his life, Sariel was given his Grace by the Supreme Deity. He was close to the four archangels and to the Deity's daughter. Though he didn't really insulted Mael for wanting to look like Ludociel, Sariel was blunt to point out his adoration to his older brother Ludociel, much to the younger goddess' embarrassment and Tarmiel asking him to be more sensible.