Collaboration Event
The more Buff effects on Red Rem, the greater the damage she can deal on one enemy. 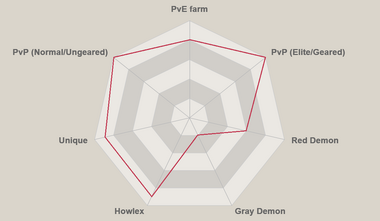 [Re:ZERO] Twin Maid Rem, more commonly known as Red Rem or just Rem, is an exclusive unit drawn from the 7DS x Re:ZERO collaboration event. Rem is actually a versatile hero that can shine in both PvP and PvE, particularly in Elite PVP, Free Stage farming, and Howlex. Her Unique ability allows her to receive a buff that increases her damage every time she ranks up, moves, or uses a skill. With one of her skills being an AoE ability, she has the potential to wipe out enemy waves in an instant.

Many have also found her niche in Elite PVP, knowing that she can self-sufficiently dish out powerful Amplify damage. Building around her is easy because there’s no specific hero requirement that unlocks her potential (since she can do it by herself). Hence, one might compare her to an upgraded version of Red Escanor or Blue Mai. However, some might still be hesitant in using her because she’s still heavily countered by “The One” Escanor.

Aside from Attack-related stats increase, Rem’s Unique ability also heals her for 30% Max HP when the Ultimate Move Gauge is maxed out. This puts her in a good position to avoid getting burst down by the enemy before she can cast her Ultimate Move. This also gives her an advantage over long, drawn-out battles. Having support heroes that can Fill the Ultimate Move gauge can definitely be used to continuously take advantage of this effect.

Her Ultimate Move is one of the strongest AoE damage, aided by her Unique ability buffs and the innate Shatter effect (Ignores Resistance).

Stat-wise, Rem has high Attack stats, average HP, and low Defense. Overall, she has a high Combat Class rating and can contribute a good amount of CC to your team.

Crushing Strike - A single-target attack with high damage multipliers. The total damage dealt by this skill will be +30% per active buff on self. Paired with her Unique ability, total damage dealt can be increased by +150%, enough to one-shot even the mightiest tanks.

Spirited Dance of the Demon - An AoE attack that can both provide utility and solid damage. This skill reduces the effectiveness of the enemy’s Ultimate Move but it can also wipe out enemies when you’re able to stack buffs from Rem’s Unique ability.

Ultimate: Night Parade of the Blue Demon - An AoE attack that ignores the resistance value of the enemy. Similar to her AoE skill “Spirited Dance of the Demon”, Rem’s Ultimate Move is best used with stacked buffs from her Unique ability.

Unique: Survivor of the Demon Clan - This ability is what makes Rem a terrifying damage dealer for both PVP and PVE. Her passive skill complements her skills to amplify its damage; not only that but it also recovers her HP when she fills her Ult Gauge.

Every time an orb is filled when using, moving, or ranking up her skills will automatically give her a buff that increases Attack-related stats by 5% for 3 turns. It can stack for up to 5 times for a maximum of 25% increase in Attack, Pierce Rate, Crit Chance, and Crit Damage.


PVP - Rem particularly shines in Geared (Elite) PVP where percentages of her stats can be increased further (due to buffs increasing more stats with equipment). However, she is still a great choice for Ungeared PVP especially for Master Tier and below. She counters most Ultimate-dependent and HP-type teams.

PVE (Story / Farm / Sub-Quests / Boss) - She can clear most of the PVE content with ease and has a decent clear time because of her AOE skills. Her skill effects are also effective against story mode bosses.

Demonic Beast Howlex (Crimson Demon) - This demon is HP-type (Green) which is weak against Strength-type (Red) heroes. Since Hell difficulty only allows the use of advantageous type heroes, Mono-Red teams are highly recommended for this Death Match and Rem is one of the best damage dealers alongside Red Derieri, Red Sariel, Red Lostvayne Meliodas, and Red Demon Meliodas.

Training Grotto - She can be used to counter HP-type (Green) Illusion Ambers.

Rem is a maid in service of lord Roswaal L Mathers, alongside her sister, Ram. While initially distrustful of Subaru, she eventually opened up to him and even developed feelings for him after he saved her.

Rem is skilled at Water Magic. Roswaal, who taught her how to use it, estimates her skill as being in was above average but nothing exceptional. She is able to attack and heal using her magic.