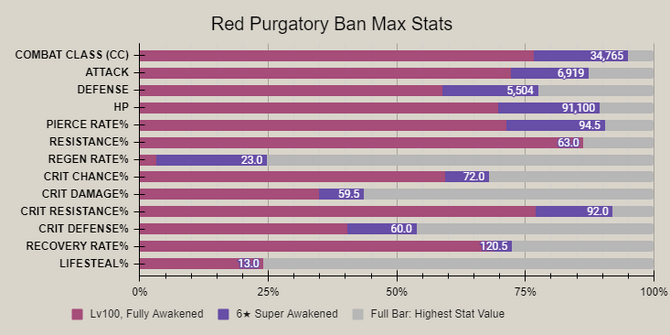 The Festival unit Purgatory Ban was released on the global 7DSGC servers on June 22nd, 2021.

Purgatory is a realm that is located in the space in between the living world and the afterlife, where time is warped - a minute in the real world corresponds to a year in Purgatory.  Merlin has second-hand experience with Purgatory after her father found a way to open a portal, and went into it for only a minute to her perception.  He came out a shell of the man that he was, mumbling constantly until his dying breath about what he had seen inside.  From what he described, Purgatory is an endless, chaotic, hellish realm where mutilated souls and predatory monsters seek prey.  The air is both scorching hot and freezing cold at the same time, and the earth is toxic, together destroying the flesh and bone of the living.

After Meliodas was awakened in his demon state with determination to become the next Demon King, it was found out that the current Demon King had taken Meliodas’s emotions and locked them away in Purgatory.  As a result, Meliodas was very cold to his friends and even went so far as to disband the Seven Deadly Sins, much to the shock of everyone on the team including Elizabeth.  Before he left the Seven Deadly Sins to seek out his brothers, he made a remark to Hawk, asking the Demon King if he’d enjoyed spying on them.  As the Seven Deadly Sins recovered from their shock of Meliodas’s departure, Hawk reflected on this comment.  Merlin stared into Hawk’s eyes and realized that Hawk actually has a connection to Purgatory and someone can travel through his eyes into the other realm.  However, as Merlin had described previously, it’s not a safe journey and thus Ban volunteers to enter by himself since he possesses immortality.

During his time in Purgatory, Ban was subjected to very harsh conditions.  As a result, his endurance and durability were drastically increased.  His physique evolved and adapted significantly, and his physical strength and speed also increased dramatically.  Eventually, he was able to escape from Purgatory and return to the world of the living.

After Ban returned from Purgatory, he found Elaine having exhausted all of her power in battle against Grey and Red Demons, despite having been warned by Gerharde not to expend too much energy.  As Elaine stated to Gerharde, she knew that her life was on borrowed time from Melascula and so she was willing to say goodbye and wait to see everyone until her next lifetime.  However, Ban did not accept this resignation and he instead grasped Elaine and used the ability “Gift” to transfer his immortality to hers, thus saving her life but rendering him no longer immortal.

However, thanks to the changes that his physique experienced from Purgatory, even without his immortality Ban was still able to withstand similar harsh conditions as Purgatory and come out unscathed.  Thus, after leaving Purgatory, Ban is considered to be the strongest member of the Seven Deadly Sins and was even able to compete in physical combat without needing to use Snatch against the Demon King in Meliodas’s body.

Heart Crusher: This skill inflicts AOE Detonate damage based on Ban’s Max HP.  Detonate deals additional damage per orb that is in the target’s Ultimate Move Gauge, which can be very useful to use against an opponent that is trying to Ult Rush or hasn’t had a chance to expend their Ultimate Move yet prior to Ban’s chance to attack.

Gift: Aptly named after the skill that Ban uses to give his immortality to Elaine, this skill applies an effect on all allies which restores a percentage of diminished HP at the start of the allies’ turn for several turns and increases Max HP.  This increase to max HP becomes hugely beneficial when used in combination with either Heart Crusher or Crazy Hunt, since both attacks’ damage dealt is based on Ban’s Max HP.  This skill is also helpful for restoring diminished HP for his allies and keeping them alive.

Ultimate Move - Crazy Hunt: A reference to Ban’s Fox Hunt ability, this Ultimate Move deals damage on all enemies based on a percentage of Ban’s Max HP.  Moreover, a Rupture effect is added when his Ultimate Move level is maxed out. This skill can be best utilized by equipping Ban with HP equipment and utilizing this move after his Max HP has been increased through the use of Gift.

Unique - Body of Broken LImits: Purgatory Ban’s Unique ability makes reference to the extremely harsh conditions that he was forced to endure while he was inside of Purgatory.  With this Unique ability, every time that his Ultimate Move Gauge is filled by one orb from using, moving, or ranking up skills, his Max HP is increased by 8% (up to five times), for three turns.  This Unique ability also removes all Stat Decrease effects that an enemy might try to place on him.

Purgatory Ban is incredible to use in PvP, and he can also be very useful in PvE for difficult-to-clear story episodes.  The best team (albeit highly expensive team) to use him with in PvP is to pair him with Red Excalibur Arthur, and then either Blue “The One” Escanor, Red Kyo, Red Eastin or Red Griamore, and lastly with Red Twigo or Green Zeldris in the sub slot.  An alternative (and cheaper) option for this team would be to use him with Red Melascula, Blue Elizabeth & Hawk, and either Red Griamore, Red Twigo or Blue Nanashi in the sub slot.

One of the main reasons why Purgatory Ban is such an incredible unit is due to his Unique ability.  Every time his Ultimate Move Gauge fills by one orb from using, moving, or ranking up skills, his Max HP increases by 8% (up to five times) for three turns and removes all Stat Decrease effects from himself.  Furthermore, using Gift restores diminished HP for Ban and his allies, and increases Max HP with each time that this skill is used.  Purgatory Ban’s primary attack, Heart Crusher, is based on dealing damage as a percentage of his Max HP and also deals additional damage per orb that is in the target’s Ultimate Move Gauge.  Both of these can have very high consequences for damage being dealt.  Last, but certainly not least, Purgatory Ban’s Ultimate Move deals AOE damage based on a percentage of his Max HP.

In order to best optimize his damage dealt since all are based on Max HP, Purgatory Ban should be equipped with HP (4-set) and Defense or Crit Damage (2-set) Since Attack substat does not add any value to his output damage, Crit Chance and Crit Damage substats are preferred on his Bracelet and Ring.