Draw Hero
Coin Shop
Red Melascula has a skill which decreases the Max HP of enemies and recovers her own by the same amount once, making her tough to take down. 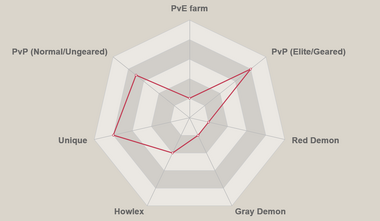 [Elite Demon] Melascula of Faith, also known as Red Melascula, is one of the Ten Commandments.  In the Anime, she is generally seen with a sassy and aloof attitude and spends most of her time battling alongside Galland.  She frequently mocks her opponents (typically the Seven Deadly Sins) and can act very bored and sarcastic during combat.

She was originally a small poisonous snake that lived in miasma from the Demon Realm, which caused her to grow into a giant hooded snake that could also take on a human form.  She uses a mysterious black matter around her body to float, but it can also be converted into wings for flight or converted into a protective barrier to wrap around herself and shield herself from strong attacks.

Melascula has the ability to manipulate the dying and the dead, along with their souls.  She can cause someone’s soul to leave their body, and then she can consume the soul to give her and the other Ten Commandments health.  Upon meeting Escanor, Melascula is at first very disinterested in his weak form.  Once he revealed his daytime form and made Galland turn himself into stone, Melascula came to despise Escanor and want to kill him faster.  However, upon eating Escanor’s soul, the intense heat from his soul left her charred and black, which made her vow revenge upon him.

She also has the ability to resurrect the dead and even resurrected Elaine, originally with the intent to destroy the Sins, but Ban was able to help Elaine overcome the rage inside her from her resurrection.

Red Melascula’s first skill, Death Stab, inflicts Blaze damage on a single enemy, which deals increasing damage per Ignite effect that is on the target.  This is particularly useful when coupled with her Commandment of Faith, which inflicts two Ignite effects for five turns at the end of every turn on heroes who have not used their skills in PvP, which causes the effects to be increasingly compounded.

Her second skill allows her to inhale a percentage of Max HP from all enemies for two turns, which can help to keep her alive in combat and better take advantage of her Unique ability, Return of the Dead, which fixes HP at 1 for three turns whenever an ally hero is defeated.  Her Unique ability can be used only once, and the effect is removed upon her death.

Lastly, her Ultimate Move inflicts damage onto one enemy and Lifesteals 40% of the damage back, which further helps to restore her own health.

Red Melascula is very useful in both geared and ungeared PvP, particularly due to her Commandment of Faith, as it applies once she enters the battle and will apply two Ignite effects for five turns on every hero that does not use their skills in a given turn by the end of their turn.  Note that in PvP only one Commandment’s effects will apply, so place her in the left-most slot if you intend to take advantage of this Commandment.

When coupled with a healer, Melascula can help to protect her allies from death as her passive ability fixes HP at 1 for three turns when an ally hero is defeated.  This can only be used once in battle, and the effect is removed once Melascula dies, but it can help to buy you some time to heal other heroes or rush their Ultimates to deal damage.

Due to Melascula’s relationships with Elaine, Escanor, and Galland, she has association effects with them each that helps to increase her basic stats and also resistance.

Melascula is an elite warrior of the Demon Clan, serving directly under the Demon King as the Faith of the Ten Commandments. Like all members of the Demon Clan, she is able to utilize the mysterious jet-black matter as shown forming wings for flight. she uses it to battle in close-combat as seen in her battle against Ban.

As stated by herself, Melascula is an expert at manipulating the dying and the dead, along with their souls. She has strong summoning capabilities, having brought forth lesser demons. As Melascula was a snake that bathed in the miasma of the Demon World to gain her demonic powers, she can transform at will into her original giant hooded snake form, which possesses great strength and endurance as she managed to easily hold down Ban with her mouth alone and endured attacks from the other members of the Seven Deadly Sins.

Retrieved from "https://7dsgc.fandom.com/wiki/Red_Melascula?oldid=7247"
Community content is available under CC-BY-SA unless otherwise noted.