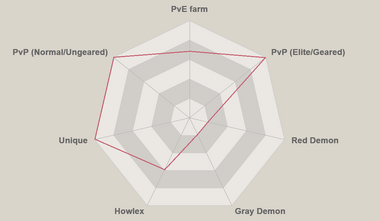 [Virtual Body Doubles] Lostvayne Meliodas or more commonly known as Red Lostvayne Meliodas is the first Festival Hero of 7DSGC. He was released during the Half Anniversary event and can only be acquired during Festival Draws. Like pick-up events, he is a guaranteed reward after completing the loyalty gauge for spending 900 Diamonds.

Festival units are top tier heroes and are sought after by most players. They have special characteristics that can be game-changing when used correctly. Now with Meliodas in possession of his Sacred Treasure “Demon Sword Lostvayne”, he can use his power more effectively than ever.

When enemies land a critical hit on Red Lostvayne Meliodas, all of his skill cards on hand will instantly rank-up. With his base Crit Resistance at 0, most of the time he will be receiving critical hits. His high Resistance, however, compensate for the damage received.

With cards ranked up, he fills his Ultimate Move Gauge much faster and delivers a strong Charge attack to enemies in AoE (ignores enemy Defense). Most importantly, his Ultimate deals AoE damage with attribute advantage, meaning the damage is increased by 30% regardless of the enemy’s attribute.

Division Impact - Has a relatively high damage multiplier, immediately imposing a threat to his enemies. At skill rank 2, it has an additional effect that increases his Ultimate Move Gauge. With his unique ability taking effect, you can use his Ultimate frequently. In PVP, set Red Lostvayne Meliodas in the leftmost slot of your main team to get the chance of naturally merging Division Impact on your first turn.

Triple Avatar - This AoE skill ignores the enemies’ Defense. It does not deal significant damage at rank 1, so it is usually best to keep this on your hand until it ranks up. When your unique ability activates and you happen to have multiple “Triple Avatar” skills, then you can do massive accumulated damage on the next turn.

Ultimate: Virtual Body Doubles - An overpowered skill that obliterates enemies regardless of their attributes. His Ultimate has the Secret Technique effect which causes additional damage with more of his cards on hand. 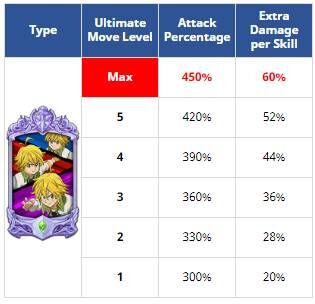 Unique: Rebate - This ability is what makes Red Lostvayne Meliodas dangerous. His Unique will increase the ranks of all of his skills when he gets hit by Crit Damage. It is best to keep his Crit Resistance at 0 to frequently activate this effect, anyway, he has a high HP and Resistance which will help reduce the total damage taken.


PVP - Red Lostvayne Meliodas is a decent choice for starters.

PVE (Story / Farm / Sub-Quests / Boss) - Although there are heroes more viable in PVE with faster clear time (Red Howzer & Blue Demon Meliodas in Boss & Free Stages, Red Derieri in Story Mode), Red Lostvayne Meliodas can still clear most of the PVE content with ease. He also has a decent clear time because of his AOE skills. He is a top pick for Akumu Knighthood Boss and Tower of Trials.

Demonic Beast Howlex (Crimson Demon) - This demon is HP-type (Green) which is weak against Strength-type (Red) heroes. Since Hell difficulty only allows the use of advantageous type heroes, Mono-Red teams are highly recommended for this Death Match. Other heroes that can outmatch Red Lostvayne Meliodas are Red Escanor, Red Demon Meliodas, and Red Derieri.