[KOF '98] Kusanagi Kyo or more commonly known as Red Kyo is an exclusive unit drawn from the 7DS x KOF’98 event. Many have found his niche in PVP as a semi utility and damage dealer due to his Unique ability. He automatically applies Ignite effects to all enemies during your team’s turn, increasing the damage applied to your enemies and reducing incoming damage by the amount of Ignite effects on the enemy. With his Holy Relic acquired from the KOF Returning Collab Event, Kyo additionally applies 2 Ignite effects on one random enemy for 1 turn at the start of the allies' turn.

He outclasses enemy team comps without Recovery/Immunity buffs. Enemies like Blue Festival Ludociel or Red Eastin would be your main attack priority so Red Kyo can continue to stack the Ignite debuffs and gain an easy advantage all throughout the battle.

Although his base Defense is below average, it is compensated by high values in Attack, Pierce, Crit Damage, and Crit Defense. If you want to take advantage of Ignite debuffs against enemies without a Recovery skill, he is a solid piece for Mono-Red teams together with Red Purgatory Ban, Red Excalibur Arthur, and Red Twigo.

Red Kyo is also a beast in PVE farming, including boss battles and story mode bosses that are unable to cleanse the Ignite debuffs.

115 Shiki: Dokugami - A single-target skill with Co-destruction effect, inflicting 20% increased damage per Debuff on the target that goes perfectly with his Unique ability. Deals significant damage up to a maximum of 425% attack multiplier which mostly one-shots most non-defensive type heroes.

Ura 108 Shiki: Orochinagi - An AoE skill with Blaze effect, inflicting +25% damage dealt per Ignite effect on the target that also goes perfectly with his Unique ability. Like most AoE skills, it has a low attack multiplier. However, given the right timing, it can deal a devastating blow to all enemies when you’re able to stack numerous Ignite debuffs on them.

Ultimate: Saishuu Kessen Ougi: Mu Shiki - Inflicts moderate single-target damage to an enemy. The extra effect is fundamentally used to add Ignite on all enemies that can set-up for more damage in succeeding turns.

Unique: A Man's Spirit - This ability is what makes Red Kyo extremely powerful. It simultaneously boosts your offense and defense because the Ignite effects apply automatically at the beginning of each turn, increasing the damage applied to your enemies and reducing incoming damage for each Ignite effect on the enemy. Just make sure that Red Kyo is kept alive to keep the debuffs active and prioritize attacking enemies with recovery skills to avoid getting countered.


PVP - Widely used in both Ungeared (Normal) and Geared (Elite) PVP as Red Kyo can execute well with most heroes. He is extremely versatile and can be used in a lot of ways, either in offense or full utility. He is commonly used in Mono-Red teams and a complementary hero to Green Iori.

PVE (Story / Farm / Sub-Quests / Event Bosses) - Red Kyo can clear most of the PVE content with ease, especially against enemies without Recovery or Cleanse. There are also event bosses where you can benefit from Kyo's Ignite effect to reduce its difficulty (Ex: Demonic Beast Crockshell). 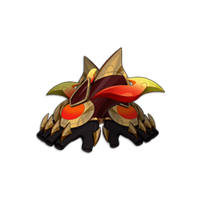 He was first introduced as a cocky delinquent high school student who is the heir of the Kusanagi clan, one of the three clans that sealed the legendary snake entity, Orochi, 1,800 years ago. His clan wields pyrokinetic powers, an inherited power that few members obtain. They, along with the Yasakani and Yata clans, keep one of the three sacred treasures used to contain Orochi long ago. His family's treasure is the Kusanagi Sword, and his family crest is the sun, represented in a stylized halo of fire. His official nickname is Scion of the Flame or The Cleansing Exorcising Flame.