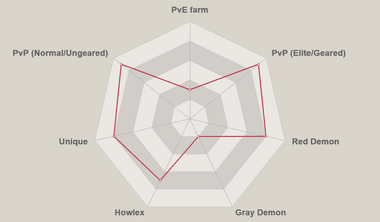 [Reincarnation of Revenge] Helbram or more commonly known as Red Helbram has a Petrify skill that incapacitates a target and removes all buffs and debuffs. He is frequently used in PVP together with Blue King, famously known as the Kingbram team.

Kingbram teams are very annoying to face in PVP considering that both Red Helbram and Blue King can petrify, making their targets completely useless in most of the fight duration. With Red Gowther to complete the team, he can quickly rank up your cards without needing to combine them.

Despite a lot of PVP meta changes throughout the frequent release of new heroes, Kingbram teams remain to be one of the most stable and functional teams for both Normal (Ungeared) and Elite (Geared) PVP. This is especially true for Master tier and below.

Red Helbram has an average base stat, however, it is compensated by his unique ability that increases his basic stats (Attack, Defense, and HP) by 5% per surviving ally.

Fog Wave - Has relatively high damage with the inclusion of his unique ability effect. Most importantly, it depletes the enemy’s ult move gauge and disables them to use their Ultimate. This skill scales higher at rank 3 with a 450% attack multiplier and depletes 3 orbs at max. Making use of Red Gowther’s rank-up skill brings out Red Helbram’s potential.

Stone Needle - Becomes extremely useful when skilled up allowing him to petrify enemies. Together with Blue King, they can cause annoyance to the enemies with their constant petrification. There are also moments in the battle where this skill saves you from sticky situations. One of those is delaying the enemy from casting his ultimate. Another is disabling the enemy’s support, especially heroes who can heal or remove debuffs. It is also important to remember that the hero cannot receive buffs and debuffs once petrified. However, if the enemy target has an existing Barrier buff and this skill fails to consume the barrier protection, the target will not be petrified.

Ultimate: Hunter Wisp - An AoE skill mainly used to cancel Buffs and Stances, especially against the likes of Red Arthur. It only has a low damage multiplier starting at 280% and has no additional skill effects that can boost the output damage (ex. Rupture, Shatter).


PVP - Kingbram teams will always be relevant in PVP. For starters who have managed to pull Red Helbram in their early stage of progression, they can effectively use him and Blue King to boost their PVP rank up to Master Tier. He inflicts a respectable amount of damage and brings utility in battle (Depletes Ultimate Move Gauge orbs, Petrify, and Cancels Buffs and Stances).

PVE (Story / Boss) - Red Helbram is useful in boss battles where crowd-control is crucial. For example, you can use him on stages 2 and 4 of the Hendrickson boss at Episode 72. However, he struggles to find his use outside of Story Mode and Boss Battles.

Demonic Beast Howlex (Crimson Demon) - Red Helbram is a decent hero against Howlex. He can be used alternatively if you don’t have a Red Derieri, Red Escanor, or Red Demon Meliodas to complete your team. However, his viability only extends up to the extreme difficulty. For hell difficulty, a Mono-Red team consisting of the aforementioned heroes is recommended.

Training Grotto - His Petrify skill helps you win against the Level 3 Red Amber Explosive Giant. The team consists of Blue King and Red Gowther. Check out Training Grotto Level 3 teams for a full list of recommended heroes on each boss battle.