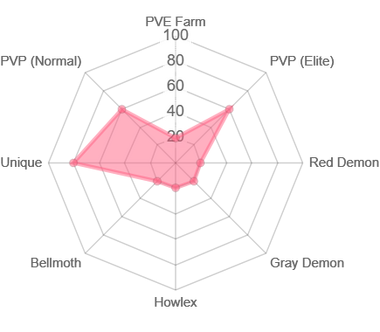 [Halloween] Mercenary Matrona, more commonly known as Halloween Matrona, is an essential hero for the Demonic Beast Hraesvelgr (especially on Floor 2). Her role is a Tank/Support who Taunts enemies and Heals allies in battle.

The Taunt ability is a must-have skill to forcibly evade Hraesvelgr’s Air Blast on Floor 2-Phase 2 (the caveat is if the attack lands on a Taunted enemy, they will not take damage). Without the Taunt, your team gets instantly wiped out of battle. You can only opt out using Halloween Matrona if the only objective is to farm materials on the first floor.

There may be several heroes with Taunt (Green Diane and Blue Derieri are common alternatives for Hraesvelgr), but Halloween Matrona’s Unique effect grants her the ability to heal allies every turn by massively increasing her allies Regeneration Rate. It also opens up a slot to omit a dedicated healer from the team. Also, you can easily activate Green Halloween Gowther’s Unique effect in setting up a team of different races with Halloween Matrona.

Halloween Matrona enables you to craft more Holy Relics knowing that Wind Sources are extremely scarce materials that can only be farmed in Hraesvelgr.

Rising Rock Pillar - Halloween Matrona’s primary attack skill removes buffs from her enemy while she is attacking. Rank 3 of this skill also cancels stances in addition to buff removal. This skill is used to counter Hraesvelgr’s buff cards and make sure that the Amplify damage is nullified when it attacks.

Heavy Metal - is a very convenient skill that works well with her Unique ability. While the Taunt is active, Halloween Matrona increases her Defense-related stats (Defense, Resistance, Crit Resistance, and Crit Defense) that lasts for three turns on all skill ranks. She can effectively soak and minimize target damage. At the same time, it increases allies’ Regeneration Rate by a large amount caused by the Taunt and Unique ability effects.

Ultimate: Prison Grip - Halloween Matrona’s Ultimate is widely used for its utility more than the damage. The purpose is to mitigate the enemy’s skill damage and remove their ult gauge based on the amount of skill rank decreases. Oftentimes, it is a good strategy to reduce Hraesvelgr’s incoming damage by canceling the pre-casted Ultimate Move and limiting the number of attacks for the next round.

Unique: Warrior's Pride - This is the main reason why Halloween Matrona is the best Tank/Support hero in the Hraesvelgr Demonic Beast battle. Her Unique ability has a pseudo-healing effect when kept at low HP. Her Taunt ability allows her to be more effective in utilizing this effect.


Hraesvelgr - Halloween Matrona is key in beating higher floors of the Demonic Beast battle. Her Taunt ability protects allies from single-target bursts and causes Hraesvelgr’s Air Blast to miss. Moreover, your team can remove a dedicated healer because her Unique ability can sufficiently provide large amounts of healing from the Regeneration Rate boost.

PVP - Halloween Matrona is still viable in PVP for teams that benefit from Taunt and Buff removal skills. The effect of her Unique ability can greatly heal allies when Matrona survives with low HP.

Training Grotto - She can be used to counter HP-type (Green) Illusion Ambers, especially against Level 3 stages. She is also effective against [Green Amber] Vigorous Conqueror.

Matrona is a former warrior chief of the Giant Clan, as well as a mentor to Diane and Dolores.

15 years ago, Diane, Dolores and Matrona were hired as mercenaries to battle against an invading army of savages. The savages had also hired a giant, the western warrior chief, Dumbelbas. Matrona challenged Dumbelbas in the midst of the battle, which led to the latter's death. Upon their return, Matrona scolded both Diane and Dolores for their pathetic display in the battle. After scolding them, she continued to train Diane and Dolores, pushing them to their limits to enhance their strength.