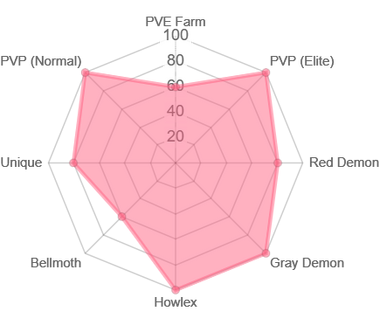 [The Goat Sin of Lust] Holy Knight Gowther is most commonly known as Red Gowther.  He is one of the most versatile heroes in the game and conveniently can be purchased from the Platinum Coin Shop.

Due to his second skill which has the ability to rank up the skills of other heroes, Red Gowther is one of the most important heroes to focus on at an early stage, particularly to ensure victory in Death Matches.

Red Gowther’s active skill inflicts damage on all enemies.  Rank 2 and 3 for this skill will also disable attack skills for one and two turns respectively.  While the damage dealt isn’t very significant, since he is able to attack all enemies at once this is useful when AOE is needed, and his attack disabling proves very useful when combatting bosses or when in PvP.

His second skill, the skill up buff, is the key aspect that makes Red Gowther so versatile and important.  Rank 1 of this buff can only affect one hero, Rank 2 of this buff affects all heroes, and Rank 3 of this buff not only affects all heroes but also adds an additional 20% to all basic stats for the next three turns.  This makes him extremely beneficial when battling Death Match and PvP enemies because you can quickly rank up your cards without needing to combine them.

His Unique ability increases all allies’ Attack by 10% if he does not take any damage during the attack.  This, while useful, is difficult to control in combat.

PvP - Gowther can be an extremely powerful hero to use in PvP, because of his skill up to aid other heroes on your team.  Additionally, because his Ultimate reduces the Ultimate Move gauge of all enemies by three orbs, this is extremely useful to use at opportune times during PvP.

SP Dungeon and PvE Farming - Gowther is helpful for PvE farming, but he is not the best hero available.  While he is beneficial to skill up other heroes, since most PvE farming does not require very high CC, he is not necessary to use in most areas. However for specific areas like Enhance/Evolve dungeons, stronger players make use of his unique ability to speed up their runs.

Death Matches - Gowther is extremely beneficial for all of the Death Match bosses.  When using Gowther in a Death Match, it is important to stagger his placement with your partner.  For example, if your partner has his Gowther in the center position, place yours in the left or right position.  This is because the cards that are provided to each player during a Death Match are random, but the type of cards will be the same for each player, so you can predict what your partner will be getting based on what cards you obtain.  In order to best use Gowther, use combat stamps to tell your partner when you have a skill up available for use.  When using Gowther in Death Matches, do not use single skill ups on your own heroes unless absolutely necessary.  Rather, it is best if you can use a single skill up on Gowther to skill up another skill up to rank 2, which in turn can be used to have your partner use a rank 3 skill up card.  Using both of your Gowthers in this way is the best way to skill up all of your heroes (both yours and your partner’s) in the maximum possible way.