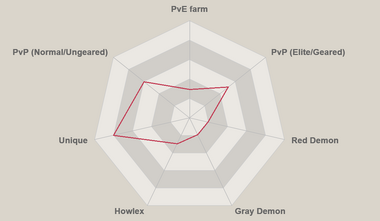 Gloxinia was the first king of the Fairy King’s Forest, but he defected during the Holy War and became recruited as the Commandment of Repose of the Ten Commandments.  As a member of Stigma during the first Holy War, Gloxinia was once friends with Drole and Meliodas.  However, he was betrayed by Stigma and the human Rou, who he believes murdered his sister Gerheade.  As a result, it drove him to turn to the Demon Clan, and eventually he became a demon himself and was appointed as a member of the Ten Commandments.  At the end of the first Holy War, he was sealed away by the Goddess Clan in the Coffin of Eternal Darkness with the rest of the Demon Clan.

As the first Fairy King, Gloxinia possesses an impressive amount of power, even without the power of darkness granted to him by the Demon King.  He has the largest wings of all fairies, which allows him to have a fantastic flight speed and evade attacks from Meliodas.  Like King, he has a Spirit Spear, although his spear is known as Basquias and is most commonly seen in the form of green, octopus-like tentacles wrapping around his body.

Upon meeting King, Gloxinia initially mocks him for being weaker and lacking proper control of his powers.  However, as the two continue to battle and King’s wings grow, Gloxinia’s opinion of King changes and he begins to see King as an equal with very similar love for their sisters as well as love for the Fairy King’s Forest.  Eventually, after seeing King’s actions as a member of the Seven Deadly Sins, Gloxinia decides to leave the Ten Commandments and returns to be affiliated with the Fairy Clan.

Pierce Stick: This attack skill does AOE attack.  Higher ranks of this skill constrain the enemy to being allowed to use only Rank 1 skills, preventing them from being able to rank up and minimizing damage received in combat.

Unique - The One Protected by the Sacred Tree: Gloxinia’s Unique ability makes reference to the Sacred Tree that is at the heart of the Fairy King’s Forest, and is the third offspring created by Chaos as the youngest “sibling” of the Demon King and the Supreme Deity.  The Sacred Tree is the one that chooses the fairy that bears the title of the Fairy King, giving birth to a new fairy whenever it judges the time is necessary to put the next Fairy King on the throne.  Thus, Gloxinia was selected as the first ever Fairy King, and was given the Sacred Spear Basquias by the Sacred Tree.  This Unique ability fills Gloxinia’s Ultimate Move Gauge by one more orb when his skill ranks up (this excludes rank increase from skills or Unique effects).

Commandment of Repose: As a member of the Ten Commandments (after he defected from the Fairy Clan), Gloxinia was granted the Commandment of Repose.  This Commandment decreases Attack-related stats of heroes who use two or more skills in one turn by 30% for two turns in PvP.  This applies to both allies and enemies when entering battle, and applies before the second skill is activated.

Another viable PvP team to use Red Gloxinia with is to pair him with Green Drole, either Green or Red Gowther, and lastly Red Wedding Diane as a sub for an Ult-Rush counter team.  With this configuration, Green Drole disables the use of the enemy’s Ultimate Move when their gauge reaches max orbs, and he also inflicts Detonate damage and counters heroes with more orbs in their Ultimate Move gauge.  Either Red or Green Gowther can be used to rank up skills and help deplete the enemy’s Ultimate Move gauge.  Lastly, Red Wedding Diane can be used to help boost Green Drole’s damage dealt.  This team is not as effective as the “Assault Mode” Meliodas team, but it can be viable in lower-tier PvP battles.

Gloxinia is the first king of the Fairy King's Forest, but later defected and became recruited as the Repose of the Ten Commandments. However, after seeing King's choice, he ultimately left and returned to affiliate with the Fairy Clan.