[Waves of the Earth] Queen Diane 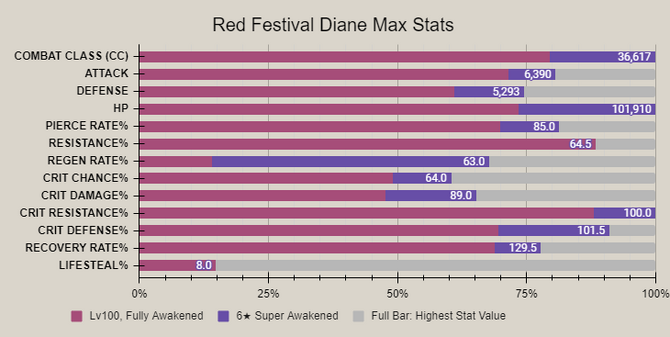 [Waves of the Earth] Queen Diane, commonly known as Red Festival Diane is the featured character for 7DS Grand Cross’ 2nd Anniv. Festival Draw. At the time of her release, she boasts the highest Combat Class Rating, HP, and Critical Resist stats in the game. Aside from PVP, Festival Diane plays a crucial role in the Demonic Beast battles, replacing Red Halloween Matrona. Since her CC and HP are quite high, she can be used as an effective shield with her Taunt ability.

In Grand Cross, Festival Diane can increase her offensive power by taking more damage from the enemy. With the help of her Unique ability and Stance skill, she can deal significant damage using her Ultimate Move (Quell increases damage dealt by 40% per active Stance on self).

Her first skill has a Pulverize effect that increases damage dealt for each orb in the hero’s Ultimate Move Gauge, additionally depleting the enemy’s Ult Gauge if Festival Diane has 4 orbs or more in hers. This gives her the utility to prevent enemies from using their Ultimate Moves while setting up and scaling her damage.

In PvP, she shines by supporting the team’s main attacker, soaking all single-target damage and mitigating the amount of AOE damage received. Moreover, she gains back the lost HP very quickly from the effects of the HP-related stats boost. Her Recovery Rate, Regeneration Rate, and Lifesteal is increased by a significant amount while the stance is active.

Her Ultimate ability inflicts high damage when used correctly. First, the Stance ability should be active to trigger Quell damage. Secondly, she should receive high amounts of damage to equally inflict more damage on the enemy.

Red Festival Diane excels in PVP because of her high base stats and immense power to boost her team offensively and defensively. She is also ideal to use against Hraesvelgr and Eikthyrnir.

Spinning Hammer - A powerful skill that works well with her Unique ability. While the Taunt is active, Festival Diane decreases allies' damage taken by 40%. She can effectively soak and minimize target damage. At the same time, her damage increases based on the damage received (up to 50%).

Ultimate: Queen's Embrace - Her Ultimate move inflicts Quell which increases damage by 40% per active Stance on self, additionally healing all allies based on the damage dealt. To maximize its potential, use the Ultimate Move while her Stance is active.

Unique: Queen of the Earth - Festival Diane protects her allies and increases her attack damage based on the damage absorbed from the enemy. This distinctive ability works best in combination with her Spinning Hammer ability. While the Stance is active, it decreases allies' damage taken by 40%.


PVP - A top-tier PVP hero, especially in Geared (Elite) mode. Having a Life/Iron Wall set provides numerous benefits for the team. First, Festival Diane will have more capacity to absorb damage. Second, she’ll constantly gain a huge damage bonus by being able to withstand enemy attacks, thus making her a viable damage dealer. Third, Festival Diane is at her peak power on mid-late rounds when she has 4 or more Ult Gauge orbs.

PVE (Story / Boss) - Festival Diane can be used to clear the difficult stages and roadblocks of PVE battles and story mode bosses. She will have limited use in grinding free stages, however, since she’s built more for defense.

Demonic Beast (Hraesvelgr and Eikthyrnir) - Festival Diane is ideal to use on all floors of the Demonic Beast battle as the main defensive support/Taunt hero. She can dish out a good amount of damage when her Unique effects are timed perfectly.