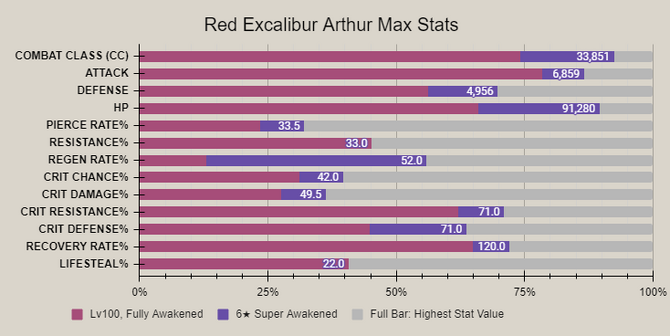 [Chosen King] Excalibur Arthur, more commonly known as Red Excalibur Arthur, is a Support that boosts Human allies’ Max HP by 30% and damage dealt to enemies by 20%. At the time of its release, he became a meta for top ranking PVP to set up a Human team popularly with Red Purgatory Ban, Blue “The One” Escanor, Red Kyo, Red Eastin, Red Twigo, and Red Griamore.

Perhaps his most valuable skill -- “Nameless Dance” grants him the ability to Taunt all enemies and reduces the amount of damage received by up to 75%. As an additional effect, it will also deplete the attacker’s Ult Gauge for each attack. This skill is beneficial for protecting allies and countering Ult Rush teams.

Red Excalibur Arthur can also inflict significant damage. He has an AoE attack with a Charge effect which ignores enemy Defense. On the other hand, his Ultimate is a single-target attack with Detonate effect which also deals additional damage based on the target’s Ultimate Move Gauge orbs.

He extends his viability in PVE by providing utility for difficult stages, events, and roadblocks of the game.  Building around him is fairly easy because he’s an all-around hero who can deal and tank damage. His Unique ability also takes effect in PVE and is one of the best passives for Human teams.

Stat-wise, Red Excalibur Arthur has a high Attack, and above-average HP and Defense. He also has a high Regeneration Rate, Crit Resistance and Crit Defense, which complements the effectiveness of his taunt ability. Overall, he has a high Combat Class rating and can contribute to a high team CC.

The King's Slash - An AoE attack with Charge effect that ignores enemy Defense, inflicting significant damage to all opponents. Red Excalibur Arthur can turn up offensively when needed due to his high base Attack and Crit Rate.

Ultimate: Deathpecker - A single-target attack with Detonate skill effect, adding 15% more damage per orb in the target's Ult Gauge. This skill can burst an enemy when its Ult Gauge is full; and deals even more damage against bosses with more than 5 orbs in their gauge.

Unique: Accession - As a valiant King of Camelot, Arthur’s presence on the battlefield elevates the morale of his Human allies. His unique ability strengthens both their offensive and defensive powers with a 20% increase in damage dealt to enemies and a 30% increase in allies’ Max HP. For this passive to take effect, all allies must be of the Human race.


PVP - Red Excalibur Arthur is exceptionally great for PVP (Ungeared and Geared) in his role as a Support for Human teams -- notably with Red Purgatory Ban and Blue “The One” Escanor. His Taunt skill protects his allies by directing all attacks to himself, receiving less damage, and depleting the Ult Gauge of his attacker. Moreover, he can also inflict significant damage with his high base Attack, Charge and Detonate skill effects.

To maximize Red Excalibur Arthur’s value in any team, equip him with HP and Defense equipment sets to effectively survive and protect his allies while absorbing damage.

Story Mode boss battles - He can be used to counter bosses with no dissolve immunity; meaning Red Excalibur Arthur can freely use his Taunt to passively deplete the boss’ Ult Gauge.

PVE - Red Excalibur Arthur serves as a buffer to Human teams which can be crucial for difficult stages and roadblocks of the game. He can be useful in various event stages and seasonal Tower of Trials.

Training Grotto - He can be used to counter HP-type (Green) Illusion Ambers. He is also effective against [Green Amber] Vigorous Conqueror to Taunt and deplete the boss’ Ult Gauge. 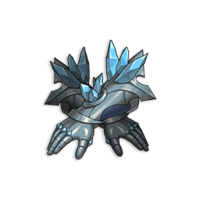