[The Lion Sin of Pride] Holy Knight Escanor or more commonly known as Red Escanor is one of the best Free-to-Play (Coin Shop) units in the game. Outside of PVP, Red Escanor (alongside Red Arthur) is a top choice against Howlex (Crimson Demon). His “Blazing Sun” inflicts heavy damage when Arthur’s buff is used on him. He is also viable in the early phases of Story Mode and Free Stage farming.

Red Escanor is the strongest when buffed and can even obliterate enemies with attribute advantage. Moreover, Red Escanor also provides utility by depleting the enemies’ Ultimate Move Gauge. He is reliably tanky in the first three turns due to his unique ability granting him an additional 50% of HP-related stats (HP, Recovery Rate, Regeneration Rate, and Lifesteal).

His trademark skill, Blazing Sun, has a relatively high multiplier for Amplified attacks. The total damage dealt by this skill will be +30% per active buff on self. That being said, Red Arthur provides an additional +90% damage using his “Royal Sword” buff on Red Escanor, considering he provides 3 active buffs from this skill (Increase in Attack, Defense, and HP).

His ultimate skill, Punishment, allows Red Escanor to charge a concentrated attack on a single-target capable of one-shotting the enemy. It does not have any skill effect but has a very high attack multiplier (1440% at max level ultimate).

Red Escanor’s Unique ability “Hellfire” makes him extremely beefy, causing enemies to avoid him as a target. However, just be aware that this buff can still be removed by skills that can Cancels Buff, Petrify, or Freeze.

PVP - Famously part of the Mono-Red Team (Red Escanor, Red Arthur, Red Gowther). Sub heroes are usually either Red King, Red Twigo, or Red Howzer, as they provide support through unique effects even when not in battle. Mono-Red teams shine more in Geared PVP (due to buffs increasing more stats with equipment) but they are also up there and still one of the best choices for Ungeared PVP for Master Tier and below.

Early PVE (Story / Farm / Sub-Quests / Boss) - He’s a reliable hero to bring in PVE especially for early to mid-tier level teams where the main priority is just to survive and win the stage. However, as you progress further, Red Escanor can be replaced by AOE-focused heroes who can grind the stages more efficiently.

Knighthood Boss (Einek) - Since the amount of remaining team HP is a key factor in getting more points, Red Escanor (with a Mono-Red team) is a viable choice for this scenario. Compared to other team options, building a Mono-Red team is F2P friendly since the core heroes are purchasable in the Coin Shop.

Red Demon - His viability only extends until Extreme and can’t be used in Hell difficulty. Red Escanor is still a viable option as your main or secondary attacker in a Mono-Red team. Speed-type (Blue) heroes are still the most effective against this demon.

Demonic Beast Howlex (Crimson Demon) - This demon is HP-type (Green) which is weak against Strength-type (Red) heroes. Since Hell difficulty only allows the use of advantageous type heroes, Mono-Red teams are highly recommended for this Death Match. Other heroes that can match Red Escanor as the damage dealer are Red Demon Meliodas and Red Nunchuck Ban. 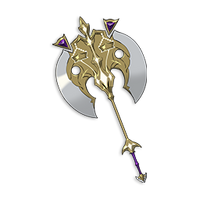