[The Ten Commandments] Derieri of Purity

Draw Hero
Red Derieri has a skill which deals great damage against one enemy, and a buff which increases her own stats and grants evasion. 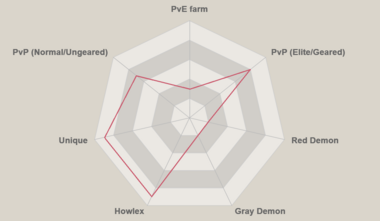 [The Ten Commandments] Derieri of Purity (Red Derieri) is currently one of the best PvE units available.  She deals out impressive amounts of damage especially once her Unique skill is unlocked, as it grants her 10% increases in Attack every turn that she uses a skill (maximum 10 times).  She is a must-have unit for the Crimson Demon (Howlex) and the Knighthood Boss Kelak.  She can also help with making clearing the story episodes a breeze when paired with another unit that can help to keep her alive, as her buff with evade skill makes her easily the best unit for story episodes (as long as she isn’t a restricted unit).

For optimal usage as a DPS dealer, equip Red Derieri with Attack/Defense equipment.  Maxing out her Affinity will provide SSR Iron Gauntlets (a Weapon Costume), which grants an additional 120 Attack and 6% Crit Damage boost.  Due to her relationship with Monspeet in the anime’s storyline, she has an Association with him (“Reasons for Looking After Her”), which increases the Associated hero’s basic stats by 6% and decreases basic stats by 1% per Ultimate Move level, as well as provides a special Association effect of 340 Defense increase.

Red Derieri’s primary attack skill, “Darkness Hand”, is a melee skill that inflicts damage equal to up to 600% of Attack on one enemy.  The lowest rank of this skill deals 240% of Attack, which even there is one of the highest amounts of damage a unit can dole out in one hit.

Her second skill, “Injection”, increases basic stats by up to 50% for three turns.  Rank 2 and 3 of this skill also grant her Evasion for one turn, which makes her immune to Attack and Debuff Attack skills from the enemy.

Her Ultimate skill, “Combo Star”, inflicts Amplify damage up to 945% of Attack on one enemy.  Her baseline for this skill is 630%, which already is an impressive amount of damage.  This move becomes even more effective when used in combination with her “Injection” Buff skill, as Amplify will deal an additional 30% damage per active Buff on herself.

As a member of the [Ten Commandments], Derieri’s Commandment of Purity decreases the damage of ranged skills by 35% in PvP.  This applies to both allies and enemies when entering battle (except for Ultimate Moves).  This Commandment applies only in PvP and has no impact in PvE (which is also important to remember when you have to face her and Monspeet in Chapter 10 of the storyline since her Commandment will not affect you).

Red Derieri’s Unique ability is where she really excels and is what makes her so amazing as a damage dealer.  Every time that she uses a skill, her Attack is increased by 10% (up to 10 times maximum).  This effect gets removed if no skills are used in a single turn.

PvP - Red Derieri can be used in both Elite and Ungeared PvP.  She’s not one of the best PvP units, but she’s still fairly useful especially when rushing her Ultimate in order to hit the opponent quickly with an Amplify damage.  Additionally, her Commandment decreases the damage of ranged skills by 35% in PvP.  While this is useful for enemies, unfortunately, this also applies to her allies as well once she enters battle, so if you are going to use her then make sure you aren’t relying on any other units with ranged skills.  Each skill card has either a sword symbol (for a melee skill) or a bow and arrow symbol (for a ranged skill).

SP Dungeon and PvE Farming - Since she doesn’t have any AoE attacks, Red Derieri is not an optimal choice for PvE farming -- while she does deal a lot of damage, she takes longer to finish off levels than other heroes with AoE who would be better suited for farming/grinding.  She’s great overall for story mode or as a reliable unit for starters in clearing difficult stages due to her buff with the evade skill though.

Death Matches - Red Derieri is great for Howlex -- a Derieri-led team can even solo the Hell level on this boss.  This can be done by utilizing her buff card (second skill) at rank 2 and rank 3 to survive until the final phase, and then have her Ultimate ready to one-shot the boss on the final phase.  She is not recommended for the Gray Demon, but she is useful for the Red Demon although there are other options that are better for this boss.

Other - Red Derieri is also great to use for Knighthood Boss Kelak, and replaces the old meta using Green Jericho, as well as Final Boss Elizabeth + Meliodas (and most other Final Bosses) due to her high damage capabilities. 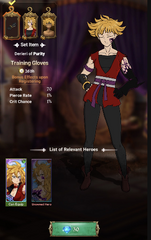