Coin Shop
Draw Hero
Red Arthur has a skill which disables Recovery Skills of all enemies and another skill which removes Debuffs from allies and increases basic stats.

[Camelot's Sword] New King Arthur or more commonly known as Red Arthur is one of the best Free-to-Play (Coin Shop) heroes extensively used in a lot of the game’s content. To this date, he is classified as a top-ranked PVP hero as part of the Mono-Red team with Red Escanor and Red Gowther. Mono-Red teams are effective in Normal PVP (Ungeared) and Elite PVP (Geared), but excels more in the latter.

Red Arthur is versatile in PVP that can bring damage and utility through buff and debuff effects. In PVE, he is seen as a support in Howlex (Crimson Demon) that adds protection and boosts Amplify damage. He is also viable in the early phases of Story Mode and Boss Battles.

Red Arthur’s ultimate inflicts a lot of damage and can easily be upgraded by purchasing duplicate coins in the Gold Coin Shop. It is highly suggested to buy copies of him and max out his Ultimate asap. Upgrading it also increases your Combat Power, thus increasing the chance of going first in every battle.

With Red Arthur’s buff, Red Escanor can obliterate enemies in PVP regardless of the attribute advantage/disadvantage. Red Arthur also has high base stats (Attack, HP, Defense) and high Crit Damage and Recovery Rate.

Light Pillar - is a key skill that counters heroes with Recovery skills. It can readily apply the debuff at Rank 1 which makes it convenient to use. Despite having a low damage multiplier, it can still inflict a respectable amount of damage to HP-type (Green) heroes.

Royal Sword - Red Arthur’s signature buff skill which increases his allies’ basic stats (Attack, Defense, and HP) for an increase in damage and survivability. Ideally, you’d want this skill to reach at least Rank 2 to buff all allies. But in some cases, using it at Rank 1 can be enough to win you the game, especially when casting it on heroes with an Amplify damage effect. At Rank 3, it can boost more stats with additional Debuff Immunity that also cleanses any existing debuff.

Ultimate: Legendary - His ultimate is a strong single target skill and has a Sever effect that doubles the chance of landing a critical hit. Although it has a low damage multiplier at level 1, you can easily upgrade it by purchasing duplicate coins in the Gold Coin Shop. At max level, an 840% attack multiplier is already capable of one-shotting most enemies.

PVP - Red Arthur can be used as a great support or buffer for mono-red teams.

Early PVE (Story / Farm / Boss) - Since you can easily acquire Red Arthur in the Gold Coin Shop and upgrade his ultimate, he is one of the most reliable companions early-game against PVE Boss Battles, Story Battles, and harder Free Stage battles. As you progress further, he can be replaced by AOE-focused heroes who can grind the stages more efficiently.

Knighthood Boss (Einek) - Since the amount of remaining team HP is a key factor in getting more points, Red Arthur’s unique ability will further increase the total HP of your Human/Mono-Red teams. Compared to other team options, building a Mono-Red team is F2P friendly as the core heroes are purchasable in the Coin Shop.

Red Demon - His viability only extends until Extreme and can’t be used in Hell difficulty. He is one of the early-game favorites versus the Red Demon after unlocking it on Chapter 5 of the main story.

Demonic Beast Howlex (Crimson Demon) - This demon is HP-type (Green) which is weak against Strength-type (Red) heroes. Since Hell difficulty only allows the use of advantageous type heroes, Mono-Red teams are highly recommended for this Death Match. With Red Gowther’s ability to quickly rank-up Red Arthur’s buff, Red Escanor can then easily dish out huge damage with his “Blazing Sun” skill to the demon. 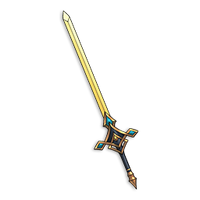 Glowing Sword of the Ljosalfar