The Seven Deadly Sins: Grand Cross is a turn-based RPG based on the eponymous manga created by Nakaba Suzuki in 2012.  The game first launched in Japan and Korea, before making its global debut in 2020.  If you’re just starting out in Seven Deadly Sins: Grand Cross, this Quick Start guide will give you a basic overview of the game and where you can find more information.

The content of the game follows very closely with the anime.  As you play, you’ll dive right into the action with Meliodas, Elizabeth, Hawk, and the rest of the cast from the Seven Deadly Sins.  Whether you’re familiar with the anime already or not, the storyline has wonderfully vivid scenes and graphics to draw you in.  In addition to the overall Story mode, there are also characters to visit and Quests to perform in each Village and even within more to do within your own Boar Hat Tavern.

Completing these Quests is one of the main ways to progress in the game, and you’ll need to beat certain Episodes in order to unlock additional content.  Available Quests will be listed at the top right of your screen when you are outside of battles or menus.  There are five main types of quests, which you can learn more about on the Quests Navigation guide.

Quest rewards are very important to continue to progress in the game.  If you have time for nothing else, try to make sure that you complete at least your daily Quests and any active events.

Occassionally, a four-week long quests event known as Hawk's Pass will be unlocked. With this unlock there are daily tasks and weekly tasks. Most of the daily Hawk's Pass tasks overlap with regular daily Quests, so it is beneficial to claim those rewards each day.

Turn-based battles are the primary aspect of this game, and each turn has you carrying out various actions depending on each hero’s available skills.  These skills are reflected through cards that are picked up on each turn and added to your deck.  Duplicate cards can be fused together to deploy stronger attacks or even unleash ultimate moves, accompanied by beautiful cutscenes. 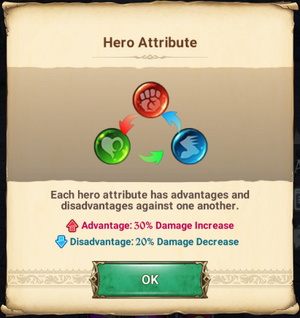 There are several different types of in-game currency, all of which can be attained either through pack purchases or through grinding/farming.  Recommendations for farming in-game currency without spending money can be found in the Free-to-Play Guide.

Gems are the hardest to earn currency, but you can get free ones through daily login bonuses, daily Quests, weekly PvP rankings, and some weekly or monthly events.  Pay close attention whenever events or Quests come up that give out Gems, as these are the rarest and most important form of currency.

The primary use for spending Gems is to perform random gacha pulls.  There are various banners that will increase the chances of getting specific units, some of which are tied to limited-time events.  Gacha pulls can either be purchased individually for 3 gems each or in a bundle of 10+1 pulls for 30 gems.  There is also a daily deal that will unlock 1 pull for watching 1 ad.  Every time that you fail to pull an SSR unit from the 10+1 bundle, a “pity bar” (bonus gauge) will increase by 20%.  When it reaches 100%, your next bundle is guaranteed to contain an SSR unit.  Each banner has its own bonus gauge.

Step Up event gacha pulls are very similar, although they do not have bonus gauges.  Rather, each step contains various rewards and bonuses, and there is a loyalty meter at the top of the screen.  These typically contain guaranteed SSR coins at specific steps or loyalty levels. 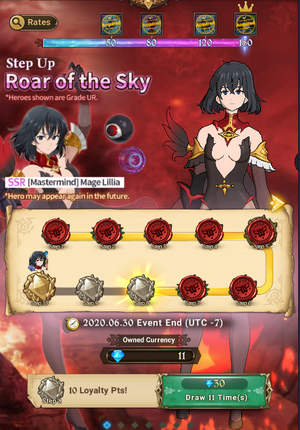 An example of how these gacha pulls work can be found in this GameOn video clip (click the image to be taken to the video): 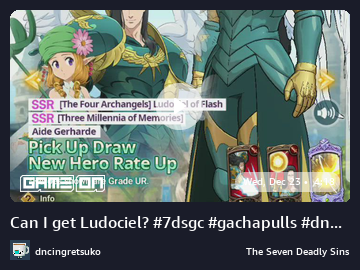 Duplicate Coins can be spent in the Coin Shop or used as entry currency for the Forbidden Square Dungeon.  If you’re not sure of what to prioritize, these are the best-recommended purchases to spend your duplicate Coins on:

As is common in many other gacha games, re-rolling an account is a way to make sure you get the best starting heroes without spending any money.  This is done by progressing through the storyline until you have enough free diamonds for your first 10+1 gacha pull.  Just completing the tutorial and the early quests alone will amass enough diamonds to be able to pull on the banner at least a few times.

During the tutorial, you will be granted a guaranteed SSR hero.  The three best heroes that can be pulled from the tutorial are Red Arthur, Red Howzer, and Green Jericho as they will help you to clear not only the early levels but they will also continue to be useful in later aspects of the game.  After that, Green Meliodas and Green King are pretty decent, although the power of Green Meliodas diminishes as you progress further through the storyline.  The least useful heroes to pull from the tutorial are Blue Ban, Green Princess Elizabeth, Red Diane, and Blue Gowther.  Even if you get one of the less useful starter units though, it is still beneficial to wait until your first draw to see if you get any good units from the banners.  When you pull on the banner, it’s important to use the 30 gems for 11 draws, since this is essentially a free draw. Take a look at the Tier List to look for current SS-tier (best heroes in the game) as these will be the best ones to try and obtain if they are currently available on a banner.

Current “must-have” heroes from the banners are:

If, after your first few pulls, you don’t get any of the above units, then you can re-roll your account which essentially just means you erase your account completely and start over again for scratch.  To do this, go to the menu of your account, then Player Info, and then select Reset Data.  This removes all of the game data from your current account and starts a fresh one.  In order to do this, make sure that you do not bind your account.  Binding your account makes your account permanent and tied to whatever account you have bound.  Only once you have pulled starter units that you are happy with should you bind your account.

Re-rolling without completing any of the missions beyond the tutorial takes about five minutes to complete.  You can also do a few of the early missions though to earn additional diamonds before you re-roll.

For even more tips and recommendations for progressing in the game, make sure that you join a Knighthood after you beat Episode 72, read through our remaining guides, and also join the 7DSGC Global Discord channel.