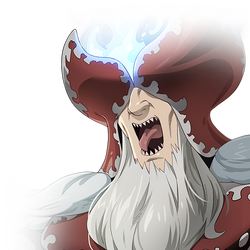 Unlocked after clearing [Episode 204] of the main story, Demonic Beast Original Demon can be summoned 3 times per day by filling up the Death Match meter in Boss Battles from Chapters 4 - 6. It is the main source of Original Demon's Energy, a material used to Limit Break heroes from Level 90 to 100. Hell difficulty is unlocked separately after clearing [Episode 222].

It is highly recommended to use heroes with Taunt, Debuff Cancel, and Power Strike.

Each demon has its unique trait and applies a certain strategy to defeat it. The most effective strategy is to build around Dark Traitor Meliodas or Red Escanor since they are capable of inflicting high damage on both of their Amplify Attack skills. There is 1 widely used strategy for this Death Match: Burst

For Burst teams, each team should have a Dark Traitor Meliodas or Red Escanor on their lineup as their main damage dealer. One team should have Red Arthur to grant to the team increased base stats and debuff immunity (essential to not be skill disabled), while the other should have Red Festival Queen Diane (to tank most of the incoming damage and dish it back out). Both teams should have Red Gowther for easy skill rank-ups.

More eminent in Extreme and Hell Difficulties, the strategy in Phase 1 is to use both rank ups from you and your ally to grant Red Arthur his rank 3 buff skill. To do this, wait until either you or your ally have a rank 2 rank-up skill, and then the other Red Gowther uses his, ensuring a full hand of rank 3 skills for both teams. Note: If you can not get a rank 3 Red Arthur buff card by turn 2 or 3, let the person using Red Arthur possibly combine their rank 1 buff cards (moving both rank 1 cards into the same place) and using a rank 1 rank-up skill to get the rank 3 buff card. If this too is not possible, reset the Death Match as you will likely lose from that point.

In Phase 2, use Red Festival Queen Diane’s attack card, as it is ranged, to drop the Original Demon below 90% HP. Following this, use the amplify cards of your main damage dealers. If you believe the boss will fall below the 20% HP threshold, and in turn evade all attacks (excluding Ultimate Moves), then use your Amplify cards as needed, and finish it off with an Ultimate Move (like Red Arthur’s). In Phase 3, it is essential that you try to kill the boss as quickly as possible as he deals tons of damage in this final phase. Ideally, you would like to kill the boss in 1 or 2 turns. Note: It is possible that one or more of your units may die after the first turn of this final phase, but the boss should be at a low enough HP level that you should be able to kill it with your remaining units.

(Twigo is only recommended if using Red Escanor)

(Twigo is only recommended if using Red Escanor)
Finally, on lower difficulties, such as Normal and Hard, other ranged attackers such as Green Festival Merlin can be used in place of Festival Diane Note: Make sure your ranged attacker is sufficiently built as the boss will still deal high damage to them, especially if they are not a Strength-type.

Various rewards are given after clearing the Death Match which is necessary for Hero Limit Break, Hero Awakening, and Equipment Awakening