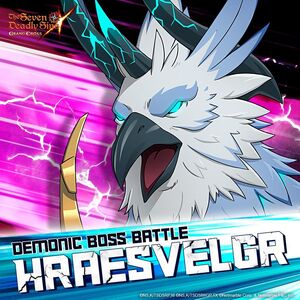 This guide covers the recommended team compositions and strategies to beat Hraesvelgr. The goal is to maximize the acquisition of Wind Source, a rare material exclusively acquired from First Time Stage Clear rewards and World Tree Tower Exchange Shop.

Demonic Beast Battles are the main source of Holy Relic materials. When crafted, it grants special effects and additional basic stats to registered heroes. It is the most difficult PVE content to clear, requiring your heroes to be maxed out in levels and equipment to compete. Specific skills are also needed to counter the gimmicks on each Phase. Power Strike, Taunt, and Cleanse/Heal are vital skills to have on your team.

There are currently three floors, each with 4 phases to clear. First Time Stage Clear Rewards can be claimed after clearing a floor once before reset. Simultaneously, stage rewards can be farmed repeatedly to acquire other materials.

You can repeatedly claim 1 Wind Source as a guaranteed reward when clearing the third floor of Hraesvelgr's Nest.

Utility/Heal - Heroes who can heal or cleanse to take away the debuffs and avoid Weak Point damage. The remaining HP of your team is carried over after clearing the lower floors. Thus it is advantageous to survive with high HP.

Taunt - Redirects all single-target attacks to the hero. It will also cause Hraesvelgr’s Air Blast (Floor 2, Phase 2) to miss when the skill is activated. You can opt-out using heroes with Taunt if you are farming Floor 1.

Support - Heroes who can power up and boost the team (rank-up, damage increase)

No.3 Adventures in Midgard

A random Demonic Beast Passive is applied on these phases:

HP-type heroes are the main target when the boss performs single-target attacks.

Phase 1 and 2 is where you collect all the needed skills to work your way around the annoying gimmicks of Phase 3 and 4.

These are the must-haves before entering Phase 4:

You should use the turns from Phase 1 and 2 to collect all the needed cards; stalling for more turns is advised in case of bad RNG.

Coming to the fight, burn cards except for:

Use the Taunt to direct all of Hraesvelgr’s single-target attacks to the hero. Maximize its taunt duration before using another taunt card.

Only use heal when your HP falls below 60% for efficiency.

Rushing the Ultimate by moving cards in Phase 1 and 2 is encouraged when using Elizabeth on your team.

In Phase 3, use cleanse to remove debuffs and avoid the boss’ Weak Point attack. You’ll know it because of the distinct skill icon appearing on the skill queue.

Festival Ludociel’s level 2 or 3 Buff should be used at the end of Phase 3 or the beginning of Phase 4. You can casually use the spare buffs to strengthen your defense on lower phases.

In Phases 3 and 4, Hraesvelgr’s damage taken does not exceed 30% of Max HP from each skill use.

At the start of Phase 3, the boss will inflict moderate damage with a bleed debuff. Next turn, it will additionally inflict Weak Point damage which can burst down a debuffed hero. To counter this, use a cleanse card or taunt to mitigate damage. If you plan to use the saved-up cleanse card, make sure to clear Phase 3 within the turn since you’ll need more of the buff duration on Phase 4. Keep in mind that the maximum damage per instance is 30% of the boss Max HP.

There are 2 effective strategies in clearing this phase:

Use a taunt card on the 1st turn. If you’re using Elizabeth, rush Ultimate by using and moving her cards.

On the second turn, immediately use a cleanse card before Hraesvelgr uses his Weak Point skill.

When the boss has an active buff, use a Debuff removal card to lessen the incoming damage.

Make sure to have a taunt card on hand before ending the phase.

Use a taunt card on the 1st turn to cause Hraesvelgr’s Air Blast to miss. Make sure to keep the taunt buff active for all the turns on Phase 2.

Note that in this phase, Hraesvelgr heals for 100% of Defense when its HP reaches 0. (once per battle)

Before ending the Phase, make sure to have a couple of high damage or Ultimate cards.

The trick here is to burst the boss in a single turn from 70% to 0% to prevent him from regenerating back to full HP. Maximum damage per instance is 30% of the boss Max HP.

You can make use of a cleanse card if you are being affected by debuffs to continue using Attack cards.

Use a cleanse card every time you are affected by the Explode debuff. Hraesvelgr will heal 20% of his Max HP every time an explosion occurs. Maximum damage per instance is 30% of the boss Max HP.

Hraesvelgr's attack debuff only allows you to use rank 1 skills. It also decreases damage taken from Rank 1 skills by 50%. To counter this, you can use Blue Festival Ludociel or Green Princess Elizabeth's cleanse cards.

The boss also inflicts Ruin and Rupture damage on all enemies which can be damaging if you have 2 or more active Buffs/Debuffs so you should also be timely in utilizing your cards.

The initial strategy is to use a Taunt card on the first turn so your tank can absorb damage. You can skill up the Taunt card to rank 2 to be safe by using Gowther's buff card. Secondly, immediately use a cleanse card when Hraesvelgr uses his Blockade. Blue Festival Ludociel's buff is ideal because it can also decrease damage taken when Hraesvelgr uses its Ultimate next turn.

On the third turn, start building your Attacker's Ultimate Move and cleanse whenever Hraesvelgr uses its Blockade skill. Another tip is to save Gowther and Matrona's Ultimate and use it only when Hraesvelgr queues up its Ultimate next turn. It is important to get rid of and delay its Ultimate as much as possible.

Repeat the process until your Attacker is ready to burst using Ultimate and Damage (Power Strike, Detonate, or Amplify) cards. Take note that the maximum damage received by the boss per instance is 30% of its Max HP.

Hraesvelgr gains another Demonic Beast Passive in this phase. One thing to keep in mind is that Hraesvelgr deletes the cards of the unit it attacks. To counter this, use a Taunt so that your tank will only lose their cards so you can secure the Attacker's cards on your hand.

Do the strategy repeatedly until your Attacker has enough cards to burst the boss using Power Strike, Detonate, or Amplify cards. Before ending this phase, make sure to set aside and keep multiple rank 2 or rank 3 cards from your Attacker.

You'd want to finish this phase within 3 turns because of Hraesvelgr's "Air Break" debuff which disables skill usage in the following order: Stance, Debuff, Attack, and Ultimate Move. You'd also want to burst Hraesvelr ASAP because its "Strong Body" passive allows Hraesvelgr to deal more damage the higher HP it has.

On your first turn, use a cleanse card (ideally Festival Ludociel's buff card) and a taunt card. You can attack Hraesvelgr immediately with your Attacker's cards that you've saved on the previous phase. The maximum damage received by the boss per instance is now increased from 30% to 35% of its Max HP which means you can burst the boss with 3 cards if you reach the damage cap per hit.

The third turn will grant a buff on Hraesvelgr so make sure to save at least one buff removal card from Matrona or Elizabeth. If possible, finish the phase within this turn because Hraesvelgr will disable your buff cards next turn. Before moving on to phase 4, make sure to set aside and keep multiple rank 2 or rank 3 cards from your Attacker.

Hraesvelgr gains another Demonic Beast Passive in this phase. The strategy is you'd want to burst Hraesvelgr as quickly as possible with your attack cards. Use a level 3 buff to increase stats (ideally Festival Ludociel's buff card) before using any Power Strike, Detonate, or Amplify cards.

Keep in mind that Hraesvelgr's "Air Break" decreases your attack by 40% and disables everything but attack skills so make sure to use all your buff and attack debuff cards on turn 1. Its "Wind Explosion" also increases basic stats by 30% for 2 turns and gains evasion for 1 turn which can still be countered by any buff cancel card from Matrona or Elizabeth. Similar to phase 3, the maximum damage received by the boss per instance is also 35% of its Max HP.