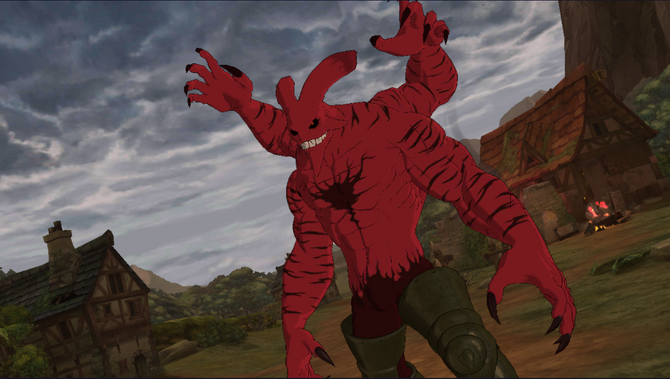 Unlocked after completing Chapter 7 of the main story, Howlex is a Demonic Beast with a violent nature. It can be summoned by filling up the Death Match meter in Boss Battles. It is the main source of Howlex’s Ear, a material used to Limit Break heroes to Level 75 and above.

To beat this demon, it is strongly advised to bring one strong attacker and two supports that can help sustain and boost your attacks. Like the Gray Demon, Howlex is also immune to CC, which makes freeze/petrify/stun moves useless.

Notable damage dealers are Red Demon Meliodas, Red Escanor, and Red Nunchuck Ban, while viable alternatives are Green Escanor, Green Jericho, Red Vivian, and Red Hawk & Elizabeth. Red Gowther is always the primary choice to fill up your first support slot since his Invasion Arrow skill provides so much offensive and defensive utility.  Lastly, utilizing Red Arthur, Green Gilthunder, or Green Helbram is the standard choice to complete your Howlex team. If surviving the attacks is a huge concern which is a common issue for beginners, you can use Green Merlin or Green Princess Elizabeth instead.

Notable info for each Difficulty and Phase

There are essentially 2 methods on how to defeat the boss. The first one involves synchronized buffs with your co-op partner to burst the demon with Ignite/Amplified attacks, a similar strategy to that of the Gray Demon guide. But instead of Green King as your damage dealer, you’ll have to use either Red Demon Meliodas, Red Escanor, or Red Nunchuck Ban. Taking the offensive stance is an effective strategy because the demon gets stronger the more turns you take -- Howlex increases its Defense and Attack-related stats when attacked by heroes. For this reason, try to avoid stalling and taking too many turns.

The other method, which is commonly used by starters, is utilizing a defensive support hero instead of buffers. Since running a burst team requires high-level stats, you can instead use an extra layer of protection from your support. Green Merlin and Green Princess Elizabeth are two of the best heroes for this role. Green Merlin does decent damage and provides barrier protection to her allies, while Green Princess Elizabeth provides cleanse, heal, and Ultimate Move Gauge increase. This method still requires your team to burst the boss on the final phase so make sure to have your ultimate attacks ready.

The most effective strategy is to build around Red Demon Meliodas since he is the strongest attacker against the Demonic Beast Howlex. On a side note, it is best to use the Infect skill on phases where Howlex has the Lifesteal ability. The demon regenerates a huge amount of HP from his AoE skill.