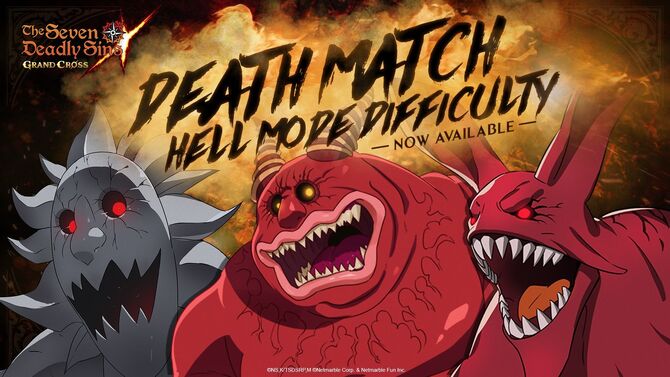 Hell difficulty is on a whole different level compared to Extreme difficulty and below. Although the number of hearts, skills, and attack patterns are very much the same as Extreme, the demons Combat Power and stats have increased tremendously (almost twice as much). Moreover, you can only utilize heroes with type advantages against the demon. The enormous power gap leads us to adjust certain strategies and team compositions to defeat it.

Why Farm Hell over Extreme?

While the usual strategy for this demon is to freeze/petrify before the end of your turn, doing this in hell difficulty makes it less efficient because it will just drag out and prolong the battle. Thus, fighting toe-to-toe is a smarter choice.

Knowing that the boss can still be affected by most debuffs (except for Bleed / Poison / Shock / Corrosion), it is advised to utilize heroes with skills that can deteriorate the demon’s power:

Team Buffs and Damage Effects will also help reduce the boss’s incoming damage and help you beat the boss much faster.

Although using Blue King is still a viable option for additional sustain, be aware that using petrify will remove all of the existing debuffs on the demon. If your partner has applied Extort and Decrease Defense-related stats, using Petrify can be detrimental.

Arthur, New King (Blue) - High damage due to Sever and Unique effects. His skill can also cancel stances and stun the enemy.

Eastin (Blue) - Best buffer to increase the Attack-related stats of your party members. She is awesome to pair with Blue New King Arthur and Blue Zeldris. She has decent HP and Defense due to her Unique ability.

Slater (Blue) - Reliable damage dealer capable of removing and disabling stances. He almost guarantees a critical hit when the demon has an empty Ultimate Move Gauge.

Zeldris (Blue) - Inflicts heavy damage when the demon is debuffed. He is also capable of recovering HP and generating high output damage with Blue Eastin in the team.

Jenna (Blue) - Her costume set bonus grants her the ability to acquire an additional Alluring Perfume after clearing the Death Match (Used to enhance Cosmetic items).

Hell difficulty may require a different strategy than Extreme as it could be hard to burst the demon without using your Ultimate skills. This time, a safe Ult Rush team with a mix of good damage mitigation is highly recommended:

Team Buffs and Damage Reduction Effects will also help your team to survive while the demon is in a flying state, especially for teams that are waiting for the demon to land on the ground so they can unleash more damage.

Liz (Green) - If all allies are HP attribute in Death Match, their Skill Ranks are increased at the start of the turn.

Elizabeth, Princess (Green) - Makes Ult rush possible due to her Ultimate and Unique abilities. She also provides all the needed sustain for your team with her cleanse and heal.

Escanor (Green) - A great offensive option with higher HP and Defense compared to Green King. Oftentimes used as part of the Ult Rush teams because most of the time you’ll be inflicting damage with his Ultimate.

Gilthunder (Green) - Second best attack buffer with good Ultimate damage. His Ultimate is fairly easy to max out due to him being an SR hero.

Helbram (Green) - Best attack buffer for burst teams. Only recommended if your party member goes full support or if your team has top-level equipment sets.

King (Green) - The best damage dealer. Just make sure he is well protected by support heroes because Green King has a low overall defense compared to other damage dealers like Green Escanor. His unique ability to increase Crit Chance for each Ultimate Move Gage orb allows him to Crit most of the time.

Merlin (Green) - Provides a barrier to protect the team and mitigate incoming damage. She also adds an Ultimate Move Gauge orb for your team to provide a head start in battle, especially when running an Ult rush team.

Valenti (Green) - Lowers the incoming damage as an effect of her Unique ability. Make sure her Necklace and Earrings have Resistance bonus stats to maximize its effect.

Zaneri (Green) - Her costume set bonus grants her the ability to acquire an additional Splendid Fabric after clearing the Death Match (Used to enhance Outfit costumes). She also provides sustain through healing and removing debuffs. Additionally creates a barrier to protect your heroes. Also works by placing her in the sub.

The strategy is pretty much similar to how the Extreme difficulty is played - BURST. This time around, timing is more crucial because the window of opportunity is narrowed down. Stalling the game and taking too many turns can be disastrous because the demon gets stronger the more turns you take -- Howlex increases its Defense and Attack-related stats when attacked by heroes.

To cite a few examples on how to burst the demon, one popular way is to accumulate large stacks of Red Derieri’s passive buff so she can one-shot Howlex at Phase 3 with her Ultimate. Another cheesy way is to utilize Red Gowther’s rank up skill to combo with Red Arthur’s level 3 buff, then use Red Escanor’s level 3 Amplify attacks to burst the enemy. Ignite effects from Red Demon Meliodas will help your team to dish out more damage.

Damage Reduction Effects will also help your team to survive from the demon’s incoming damage. Howlex is immune to CC which makes freeze/petrify/stun effects useless.

Derieri (Red) - Best attacker to burst down Howlex especially at Phase 3. Stacking up the buffs from her Unique ability can eventually one-shot the demon.

Ban, Nunchuck (Red) - Has a Weak Point effect on his skill which results in 3x more damage against Debuffed enemies. A good combination with Red Demon Meliodas’ Ignite skills.

Elizabeth (Red) - Used as a pseudo-healer in the sub-slot where allies are healed for 10% of max HP at the start of the next turn when taking damage.

Various rewards are given after clearing the Death Match which is necessary for Hero Limit Break, Hero Awakening, Equipment Awakening, and Costume enhancement materials.