Each Hero has a variety of Costumes that can be unlocked, which give boosts to the Hero when in combat.  These Costumes are a great way to gain CC, particularly in mid- to late-game gameplay.  While these can be acquired at any time, these are considered “long-game grinding” options for increasing CC.  A maximum of five Costumes of each type can be equipped at a given time, and the boosts are additive.  The three categories of Costumes are Outfit, Weapon, and Cosmetic.

Outfit Costumes are similar to armor in appearance -- these could be a shirt and pants, a dress, a suit of armor, etc. 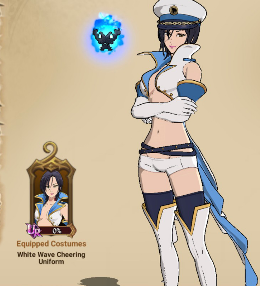 Weapon Costumes will typically be something that your hero will hold in their hands -- examples of this might be gauntlets, a sword, or a bow.  Merlin’s weapon will be her orb. 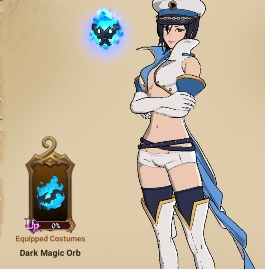 Cosmetics will typically be something affecting your hero’s face or head -- examples of this would be glasses, different hairstyles, or a hat. 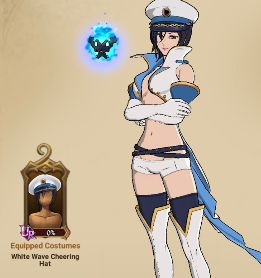 Costumes can be bought through the Sacred Treasure Shop, by Limit Breaking Heroes, buying them in the PvP Vaizel Fight Festival Shop, or by maxing out Affinity for a given Hero.

The Sacred Treasure Shop has four main areas: Events, Weapon, Outfit, and Cosmetics.  These are covered in further detail in the Spending Guide, and will always require either spending money or diamonds.  SR, SSR, and UR costumes can be acquired through this section of the Shop.

Each time that you Limit Break your heroes to a new grade, you will acquire a new costume of that grade.  This becomes a great way to acquire more UR costumes for frequently used heroes, as you can Limit Break other variants of the same character to further boost your hero.  For example, Limit Breaking Red Gowther, Green Gowther, Blue Gowther, and Green Halloween Gowther all to UR will result in having four UR costumes. 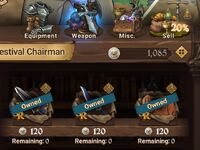 Costumes can be obtained for each ero by reaching level 5 Affinity (maximum level).  These will typically be a weapon or a cosmetic.  While these are always SSR Costumes, they’re a great F2P way to add to your closet until you’re able to save up to obtain more UR Costumes. 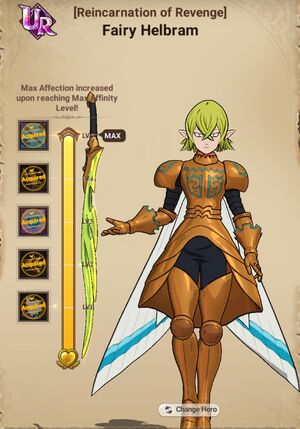 A maximum of five Costumes from each category can be registered to a hero at any given time.  The bonuses from all five Costumes will be additive, so it is best to strive for achieving five UR Costumes per category per character.  Variants of the same character (for example, Green Gowther and Red Gowther) are able to share the same closet, so evolving multiple variants of the same character to UR will help to unlock more UR Costumes. 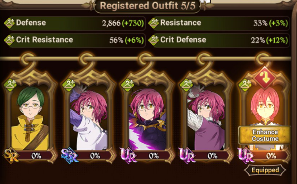 Additionally, one Costume of each type may be equipped, which will affect how your hero will appear when attacking or defending in a battle.

Additionally, there will periodically be daily tasks which contain Costume enhancing materials as a reward, which are a must to complete due to their high reward for low cost and low effort required.

Enhancing Costumes will increase their bonus stats, as well as potentially their grade (with UR being the maximum).  Only the main stat will be enhanced. 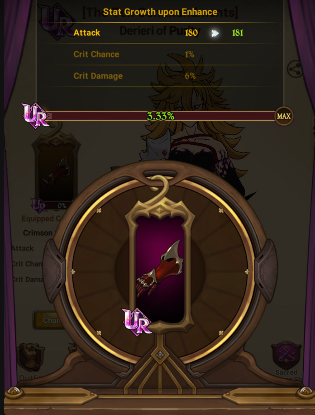 The following materials are required for Enhancing:

Some Costumes, such as the Halloween Costumes, will have special set bonuses.  For example, Gowther’s Cat Witch Costume Set, which contains the Cat Witch Outfit, The Witch’s Cat, and Dreameater Cat will provide a Costume Set Bonus of changing the Ultimate Move Effects (starting grade SSR only), and provide one additional Anvil as a Set Bonus Reward upon clearing Fort Solgres Stages.  This bonus can be applied a maximum of ten times per day -- if a duplicate effect exists, then the Set Bonus of the hero farthest to the left will activate.  This outfit becomes available by evolving Green Halloween Gowther to UR, and the weapon and cosmetic can be bought from the KOF Collab Exchange Shop.  Limited edition costumes such as these are important to grab when they’re available, as they can also be added to your registered outfits for other variants of the same character. 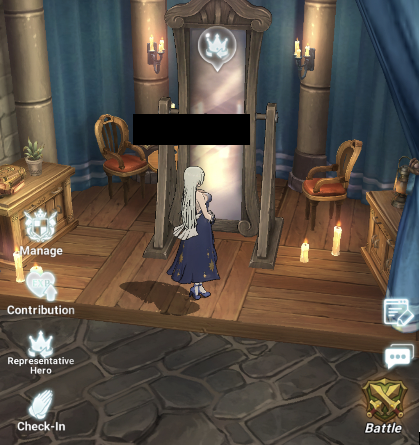 Do you have a favorite Costume?  If so, you can feel free to share in the comments section below, within the comments or Gallery sections of any Hero page, or on the Kawaii Costumes flex page.