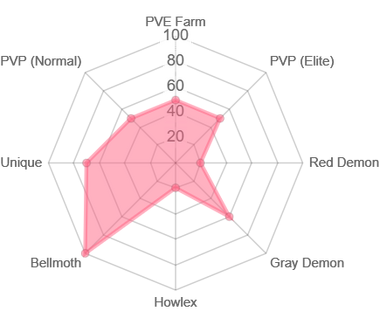 Zaratras was a member of the Holy Knights and was once the strongest in Liones before his death ten years prior to the beginning of the series.  He was Dreyfus’s brother, Gilthunder’s father, and the superior of the Seven Deadly Sins prior to his death.  Like Bartra, Zaratras believed in the Seven Deadly Sins, and although publicly he was serious and tough, inside he was soft, silly, and overemotional.  He was a highly skilled and very fast swordsman, and Meliodas even considered him to be invincible during their training sessions.  He also was a Druid, which allowed him to be able to use magic.  Zaratras’s innate power is Great Thunder (or Thunder God), which grants him the ability to generate and manipulate lightning.

When Zaratras first met Meliodas, it was in the destroyed land of Danafor.  There, Meliodas was clutching the infant Elizabeth and refused to let go of “his woman”, which confused Zaratras.  When Bartra decided to adopt Elizabeth as his third daughter, Meliodas accepted it in exchange to be one of Liones’s Holy Knights.  Initially, Zaratras took this suggestion as a joke, until Meliodas beat him in combat.

Zaratras was murdered by Hendrickson, who had poisoned Zaratras under Dreyfus’s orders.  Meliodas and the other Seven Deadly Sins discovered his dead body when they entered the castle after having been summoned for a meeting.  As a result, they were framed for Zaratras’s murder and shunned as traitors.

Melascula brought Zaratras back to life, along with many other souls.  Despite having been murdered by Hendrickson, he held no ill will against Hendrickson or Dreyfus, and instead blamed himself for not saving them from the Demon’s control and not controlling himself from eating his favorite food even when he knew something was amiss with Hendrickson.  Since he was not an angry vengeful spirit, he kept to himself mostly and traveled around Liones.

During Hendrickson’s battle with Fraudrin, Zaratras intervened and protected Hendrickson.  Initially, Hendrickson thought he was hallucinating, but Zaratras confirmed he was not and encouraged Hendrickson to focus on releasing Dreyfus from Fraudrin’s control.  Together, the two Druids fought Fraudrin.  Having known that his Purge ability alone would not be sufficient to kill Fraudrin, Zaratras used all of his vital force to use a Purge strong enough to free his brother, which allowed a freed Dreyfus to wound the expelled Fraudrin.  As Zaratras’s soul returned to the Capital of the Dead and his body faded, Zaratras left Hendrickson and Dreyfus with parting scolding words and reminded them to take responsibility for their actions and asked them to let GIlthunder know that he is always watching over him.

Purge of the Lightning God: Zaratras’s first skill is named after his primary move, Purge, which is a secret Druid technique that erases abominable souls.  His innate power, Great Thunder, gives him the ability to generate and manipulate lightning, and so he is known as the Thunder God.  This skill does AOE Shatter damage, which ignores Resistance and is perfect against bosses especially Bellmoth who has high Resistance.

Unique - Lightning God: Zaratras’s passive ability is similar to Green Festival Zeldris’s Cleave ability.  With this Unique ability, if a Critical Strike does not occur when the hero (Zaratras) attacks an enemy, then Zaratras’s damage dealt is increased by an amount that is equal to the Crit Chance.  This ability does not apply in PvP, but it is very useful in PvE.  Equipping Zaratras with gear having Crit Chance sub stats will help to increase his damage that is dealt as a result of his Unique ability.

Green Zaratras is beneficial as a main damage dealer for the Bellmoth Death Match boss.  Zaratras can be used in either a Burst team or a Counter team composition.  In a Burst team, the optimal strategy is to pair him with Green Helbram, Green or Red Gowther, and Green Deathpierce.  In a Counter team, Green Estarossa replaces Green Helbram’s position in the team composition.  With both team options, Green Deathpierce works in the sub slot to decrease the boss’s Crit Resistance and Crit Defense, and either Green or Red Gowther can be used for skill rank ups.  Since Bellmoth is able to greatly increase its attack-related stats when it survives with low HP, rushing damage with Green Zaratras by using his attack skills is the most efficient way to beat the boss.

Outside of Bellmoth, Green Zaratras can also be useful in situations where a mono-green or heavily HP-attributed unit team will have attribute advantage.  For example, Final Boss Diane, when available, is weak to HP attribute units and thus is susceptible to Green Zaratras’s attacks.  However, he has limited utility for PvP since there are many other units that serve better in PvP.

Zaratras is a Great Holy Knight and was once the strongest in the order of Liones' Holy Knights before his death ten years prior to the beginning of series.

He is also the father of the Holy Knight, Gilthunder, and was the Seven Deadly Sins' superior during their time as Holy Knights for the kingdom of Liones, prior to them being framed for his death.