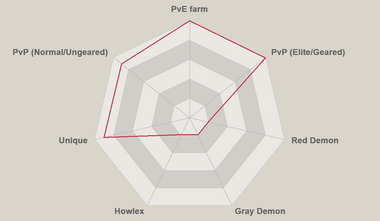 [KOF '98] Omega Rugal or more commonly known as Green Rugal is an exclusive unit drawn from the 7DS x KOF’98 event. He is one of the main Damage Dealing heroes in a Pierce team comp along with Blue Demon Meliodas and Red Howzer. With his high Pierce Rate stats, he can clear waves effortlessly using his “Gravity Smash” skill. He also adds utility by decreasing the enemy’s attack-related stats. With his Holy Relic acquired from the KOF Returning Collab Event, Rugal increases his Pierce Rate by 10% each time he is hit by an enemy's skill. He can stack the bonus for up to five times totalling to 50% bonus Pierce Rate.

You want to have as much Pierce as you can possibly get on Green Rugal, so Pierce Rate is always the desired substat to have on your Bracelet, Ring, and Costumes. Pairing him with Blue Lillia is also ideal, as she boosts the pierce damage inflicted towards enemies.

Although his base Attack is below average, it is compensated by high values in Defense and Pierce Rate.

Gravity Smash - An AOE skill with Pierce effect, inflicting 3x Pierce Rate increase to your damage output. This skill is similar to that of Red Howzer’s and Blue Demon Meliodas’ Pierce skill cards, having the same attack multipliers of up to 250%. The difference is that Green Rugal can potentially inflict more damage because he has the highest Pierce base stats compared to the two.

Genocide Cutter - A single-target skill with an additional debuff effect decreasing the enemy’s Attack-related stats (Attack, Pierce Rate, Crit Chance, and Crit Damage). It is mainly used to reduce the effectiveness of the enemy’s damage dealer, giving Green Rugal a good chance to activate his Unique ability in case he is targeted.

Ultimate: Gigantic Pressure - Inflicts immense single-target damage that can one-shot most enemies. With his high Pierce stats, the Charge effect further increases your damage output by ignoring the enemy’s Defense. This skill also has a relatively high attack multiplier even at level 1 with 700%.

Unique: Grounded Confidence - Green Rugal has average HP and high Defense-related stats which makes it hard for the enemy to one-shot him. So when his HP falls below 50%, it basically allows him to reset by removing all debuffs and healing back at max HP. Moreover, he will additionally get a 15% stat boost, making him even more powerful than before. This unique ability will inflict doubt on your opponent whether attacking Green Rugal with basic skill cards is a good decision. Usually, only strong ultimates and rank 3 (gold) skill cards can confidently one-shot Green Rugal from above 50% HP.


PVP - Viable in PVP to complete a Pierce team with Blue Lillia and Blue Demon Meliodas. Together, they create a good combination of strong AOE attacks and sustain.

PVE - Used extensively to farm materials, especially in Boss Stages. With Blue Lillia and Red Howzer, they can clear the waves faster than most teams because of their strong AOE Pierce attacks. You can fill the sub-slot with a hero that gives benefit to your main team using their unique abilities such as Green Deathpierce as he increases your chance of inflicting more damage from critical hits.

Knighthood Boss (Akumu) - Akumu has a shield that redirects all attacks away from the boss to avoid damage, hence, an AOE attacker is needed. Using a Pierce team comp is one way to counter this mechanic. Green Rugal, Blue Demon Meliodas, and Red Howzer are three of the best heroes with strong AOE pierce attacks. Adding in Blue Lillia to amplify Pierce damage makes it easier to defeat the boss.

Rugal Bernstein is a recurring boss in SNK's The King of Fighters fighting game series, and is often considered one of the most difficult bosses in the entire series.

Feared throughout the political and fighting world, Rugal was an influential arms dealer who operated aboard his aircraft carrier Black Noah. To those who would oppose him, he would defeat them and later preserve their bodies in liquid metal to add to his grisly trophy room. He used to work with his younger brother, but they separated over conflicting interests. When Rugal was about 25 years old, an 18 year old Goenitz took out his eye with one strike and gave him a small portion of Orochi's power for surviving the attack. Since then, he has a bionic eye to replace the one he lost.