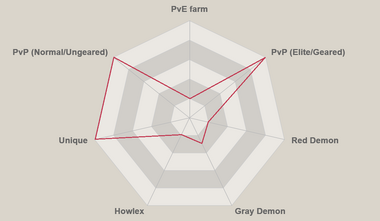 [Re:ZERO] Twin Maid Ram, more commonly known as Green Ram, is an exclusive unit drawn from the 7DS x Re:ZERO collaboration event and given as a reward for completing the collaboration quest during the event period.

Green Ram is primarily used for her Unique ability, increasing Unknown race allies' basic stats (Attack, Defense, and HP) by 20%. She is notoriously famous as a Sub in PVP teams with Green Festival Merlin and Blue Emilia. She is also viable in PVE where Unknown teams transcend in battles, like Knighthood Boss Belgius.

Her skill mainly revolves around supporting her allies by Canceling Stances and Stunning enemies at play. She also inflicts Rupture, dealing double damage against enemies with buffs. Her Ultimate Move decreases all enemies’ offensive power by inflicting AoE damage that decreases Attack-related stats by 30% for three turns.

Stat-wise, Green Ram has high Attack and Defense-related stats, notably Crit Resistance and Crit Defense. She has the potential to shine on both offense and defense. With high base stats, she contributes a good amount of Combat Class rating to your team.

Fura - A single-target attack similar to Blue Goddess Elizabeth’s skill that cancels stances and stuns the enemy starting at rank 2. This skill is mostly used to disable the enemy damage-dealer and prevent/remove Taunt, Counter, and Damage Decrease caused by an enemy hero’s stance.

Eat This - Similar to Green “Assault Mode” Meliodas and Green Gilthunder’s attack skills, this skill does AOE Rupture damage, with 100%, 150%, and 250% of Attack respectively for each card rank.  Rupture damage does double the amount of damage against Buffed enemies. This effect heavily counters enemies who uncontrollably receive buffs caused by their Unique effects (Green Shin, Blue “The One” Escanor, Red Rem, Blue Mai, etc.)

Ultimate: Don't Disturb Ram - This Ultimate is an AOE attack mainly used to reduce the offensive power of enemies for three turns, decreasing their Attack-related stats by 30%. Don’t expect high damage from this skill as it only has a 450% attack multiplier at max level.


PVP - Green Ram is a must-have hero for Unknown Race teams in PVP. Her unique ability works in the Sub slot, innately boosting her allies’ Attack, Defense, and HP. When entering the battle, her skills also provide crucial utility for the team.

Equip her with HP and Defense equipment sets for high CC. It also allows her to survive longer and continuously perform her role.

PVE Battles - Unknown teams can be viable in various PVE game modes. Use her as a sub, similar to how you set up your PVP team.

Knighthood Boss Belgius - Unknown teams are one of the viable options against this Demonic Beast. Green Ram is mainly used to increase her team’s stats and stun the minions.

Training Grotto - She can be used to counter Speed-type (Blue) Illusion Ambers. Her stun is also effective against [Goddess Amber Illusion] Hendrickson.

Ram is Rem's sister and one of the twin maids working for Margrave Roswaal L Mathers. Debuting in Arc 2, Ram originally played a rather neutral role, neither assisting in Subaru's endeavors or directly going against him, like her sister–save for one of the failed loops where Rem succumbed to the curse. In the arc's final loop, however, she played a vital role, allowing Subaru to prevail and stop the Demon Beast rampage in the forest.

Ram is able to use Wind Magic and is mentioned to be relatively skilled in it.