Draw Hero
Coin Shop
Green Nunchuck Ban has a skill which adds lifesteal to a portion of damage dealt and is very good at staying alive. 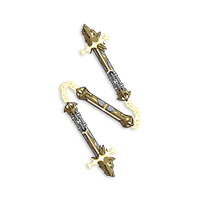