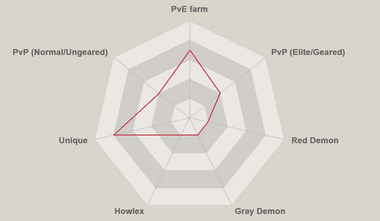 [Light of Hope] New King Arthur was given as a free UR level 80 fully Awakened unit completing all missions during The One Festival event (02/16/2021 - 03/02/2021).  His background in Seven Deadly Sins correlates well to Arthurian lore occurring in Camelot, and thus he has a relationship and Association with Merlin.  As is indicated in his introduction arc, he is rumored to have just become the new king of Camelot after having successfully pulled out a holy sword that was stuck in the ground.  Every Holy Knight tried and failed to pull it out, and thus once Arthur succeeded he was named the new king of Camelot.  Merlin, the Boar Sin of Gluttony, at some point meets Arthur and becomes his teacher and travels with him in his explorations.

His Ultimate move, “Legendary” inflicts Sever damage equal to a percentage of Attack on one enemy.  Sever damage results in a three times Crit Chance increase.  The highest amount of Sever damage that he can achieve is 975% at a 6/6 Ultimate Move.

Arthur’s Unique ability is what makes him a king of PvE.  His Unique ability, “The Great Cause”, increases allies’ damage dealt to enemies by 35% and decreases damage taken by 35%.  However, this requires that all allies must be alive.  This applies as soon as Arthur enters battle, and excludes PvP and Death Match content.

Green New King Arthur is useful for PvE content, such as clearing the Tower of Trials and Final Bosses.  He can also help to give a final edge to combat when completing story mode missions, and he is extremely helpful to clear boss battles quickly.  Unfortunately, since his passive does not apply in PvP or Death Matches, he is not as useful in those scenarios.  His passive only works if all allies are kept alive, so he’s particularly useful when paired with a healer and/or units with high HP.  He does well at boosting up his allies’ attacks and minimizing the damage that they take.

Since all of his skills deal damage equal to a percentage of Attack, it is best to equip Arthur with gear that will increase his Attack as high as possible. 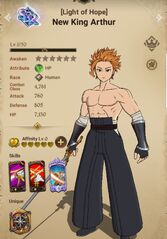