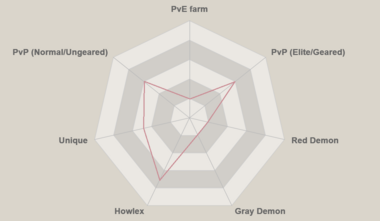 In the anime, Monspeet is a very reserved gentleman, which is fitting with his Commandment, and hates rude and ill-mannered people.  He is typically seen at Derieri’s side and is a great balance to her quick and crude mannerisms by being calm and reserved. He has very high sensory and homing attack capabilities and possessed tremendous physical strength.  Due to his quiet nature, he is often overlooked, but due to his Commandment of Reticence, anyone who is around him and has expressed hidden feelings or emotions will have their voices blocked.  He has an almost sibling-like or couple-like relationship with Derieri, and when resting or regaining their powers they are always together side-by-side.  He demonstrates emotional tenderness towards Derieri when he finds her a cute dress and also promises to grow back her hair after it gets damaged.  When in combat, they seem prepared to die as long as they are together, and Monspeet will frequently take Derieri into his arms whenever they are greatly threatened by an enemy.  Despite his protective nature, though, he is also ready to scold her when she behaves recklessly.  Throughout the anime, it is hinted that he has words that are kept hidden in his heart that he cannot tell to Derieri.

(Elite Demon) Monspeet of Reticence, also known as Green Monspeet, is of an HP attribute.  When using him in combat, he can be best utilized for his ability to deplete the Ultimate Move Gauge orbs of his enemy and also for preventing enemies from gaining Ultimate Move Gauge orbs from using skills in PvP.  He is also able to remove stances from enemies and apply Ignite effects.  He can be acquired from the Platinum Coin Shop if not available on current banners.

Black Fire: Inflicts damage onto one enemy and can deplete Ultimate Move Gauge orbs.  Also will delete one or two of the target’s skills, depending on the rank of the skill when used.

Ultimate - Hellfire Bird: Removes stances from all enemies and inflicts damage.  Applies two Ignite effects for four turns.  Ignite causes the damage taken by the target to be increased by 10%, and can be stacked.

Unique - Master of Hellfire in the Demon Realm: Increases damage that is dealt by 100% if attacking enemies with the Ignite debuff, which pairs well with his Ultimate move.

Green Monspeet can be very useful in battling the Crimson Demon Howlex as he is able to apply Ignite to the boss, similar to Red Demon Meliodas and Red Vivian.  Equipment for Green Monspeet should be focused on an Attack and Defense build.

When used for PvP, Green Monspeet can be useful for countering Ult Rush teams due to his Commandment preventing allies and enemies from gaining Ultimate Move Gauge orbs from using skills, and for Black Fire depleting Ultimate Gauge orbs.

He pairs well with using either Green Escanor or Red Demon Meliodas for dealing damage, Red Gowther for ranking up skills, and Red Griamore in the sub slot to utilize his Unique ability that increases all allies’ HP-related stats by 15% in PvP.  When utilizing his Commandment, it is important to remember that your own team will also be unable to gain Ultimate Move Gauge orbs from using skills.

Another good option for PvP is to use him in combination with Red Kyo (from the KOF Collab) as a good damage dealer since Red Kyo has also apply Ignite effects, and then can inflict Co-destruction damage to do even more damage to enemies.  Red Kyo’s Unique ability applies two additional Ignite effects on all enemies for three turns at the beginning of each turn, reducing the damage dealt to allies by 5% for each Ignite effect on an enemy, which only continues to stack when combined with Green Monspeet’s Ultimate and Unique abilities.

Monspeet is an elite warrior of the Demon Clan, serving directly under the Demon King as the Reticence of the Ten Commandments. He fought in the ancient Holy War against the Goddess Clan and the other races (human, fairies, and giants).

As a member of the Ten Commandments, Monspeet is an extremely powerful demon. Like all members of the Demon Clan, he is able to utilize the mysterious jet-black power of darkness, as previously seen by Meliodas, forming wings for flight and other such feats. His aura, combined with the other Ten Commandments is so powerful that it made the normally calm Hendrickson sweat in fear by their mere presence and unnerved Meliodas when he sensed it from several kilometers away.