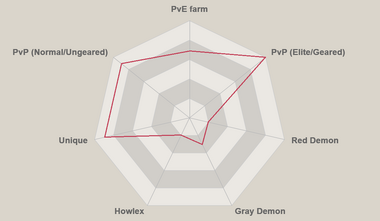 [Magic Weapon MK-II] Valenti of Obsession was a unit added for the Seven Catastrophes Special Draw.  She is another HP variant of Valenti, who was an original character that was created specifically for Seven Deadly Sins Grand Cross and is a member of the Seven Disasters, an antagonist group that seeks to destroy the Seven Deadly Sins.  In the event battle storyline, this version of Valenti is equipped with a weapon that she has built, which are basically two very large arms supporting her weight.  These are similar to the arms that are suspended in the air next to her in her normal OC form, but they are much much larger.  As she describes, the weapon works pretty well, but it’s not as easy to move around, likely because it’s significantly larger than her previous gear.  To resolve an issue with low energy output, she replaced the battery with a golem core that absorbs and stores magic from nearby sources, which is an essential and unique part of the design of her weapon.  She is a great unit to use in PvP.

Chain Reaction: MK-II Valenti’s first skill does AOE Sever damage, which gives a 2x Critical Chance Increase.  Rank 1 of this skill does 120% Attack, Rank 2 does 180% Attack, and Rank 3 does 300% Attack.

Ultimate - Event Horizon: MK-II Valenti’s Ultimate Move does AOE damage, and increases the damage that she will deal by 50%.  This move also decreases damage that she takes by 50% for 3 turns.  Both of these effects are useful in both PvP and PvE.

MK-II Valenti has high utility in both geared and ungeared PvP.  In PvE, she can work well with Green Roxy, whereas in PvP she works well paired with Green Halloween Gowther and a unit from another race that isn’t human or unknown, such as Green Diane.  Green Deathpierce in the sub slot will work well with a mono-green team.  Optimal gearing for MK-II Valenti is to use Attack + Crit Resistance (or full Crit Resistance), with either Blue or Green Lillia as her Association.  This will allow her to increase the amount of damage that she can deal out since her passive increases her Pierce Rate and Crit Damage by the value equal to half of her own Crit Resistance at the start of the battle (applies once she enters into the battle). 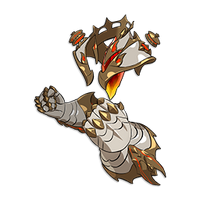 Valenti is an original character made for Grand Cross mobile game. She is a member of the Seven Disasters. She used to live in an unknown world where she was forced to live isolated in a laboratory in order to develop weapons until being summoned by Lilia after her wish to find friends who share her ideology. Valenti quickly becomes friends with the mage and agrees to help her to achieve her goal.