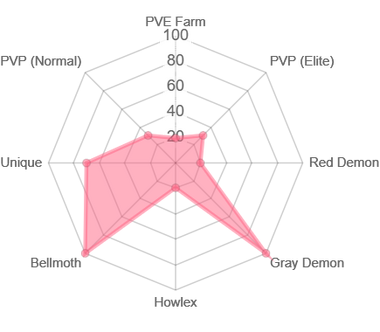 Liz was one of the reincarnations of the Goddess Elizabeth, who was unique in that her personality and appearance were different from other reincarnations because she had short pink hair whereas all other reincarnations had silver hair.  At the time of this reincarnation, Danafor was a city in Brittania that rivaled Liones in terms of power and military might.  Liz was originally a knight from an enemy kingdom of Danafor’s, after having been sold to them as a slave, which caused her to lack trust in other people.  She was captured in a failed night ambush attack attempt and was sentenced to death in Danafor, but Meliodas, who was leader of the Holy Knights at the time, took pity on her and decided to save her.  He took her to his home and told others that anyone who objected to her presence would become her enemy.  Initially, she was wary of him and thought that he was only after her body, but she eventually warmed up to Meliodas and they became lovers.  She had a very tough-seeming demeanor but was actually very kind and compassionate, and cared deeply about Meliodas and the people of Danafor once she came to know them all better.  When the kingdom of Danafor was attacked by the Ten Commandment, the demon Fraudrin recognized her as a reincarnation of the Goddess Elizabeth and intended to use her blood to open up the Coffin of Eternal Darkness.  Liz didn’t understand what he meant and so she went to battle with Fraudrin, and ended up being stabbed in the chest by him.  Meliodas declared that his failure to protect Liz and the citizens of Danafor was his sin as a member of the Seven Deadly Sins.  Prior to Liz passing away, she asked Meliodas to promise that he would never forget the principles that he stands by, even if he forgets who he is.  As a reincarnation of the Goddess Elizabeth, Liz could’ve used her abilities if she’d regained her past memories, but tragically she passed away from being able to manifest and only regained her memories upon the moment of her death.  Meliodas’s anger and sorrow over losing Liz caused him to lose control of his power and completely obliterated Danafor, making Liz of Danafor a pivotal reincarnation of the Goddess Elizabeth because he became the Sin of Wrath due to her death.

Cross Cut: When using Liz’s Cross Cut skill, it is best to always use it at either the 2nd or 3rd rank since these will help fill her Ultimate Move Gauge with extra orbs, thus allowing her to use her Ultimate Move more frequently in the same battle.

Angry Attack: Liz of Danafor’s Angry Attack decreases the enemy’s skill ranks, which can be very useful in preventing the opponent from being able to use high rank cards against her and her allies.  Higher ranks of this skill will also deplete the opponent’s Ultimate Move Gauge by the number of skill rank decreases.  Thus, this skill is best used when the opponent has multiple higher rank cards available for use as she’ll both prevent their high rank use and effectively prevent them from filling their Ultimate Move Gauge.

Ultimate Move – Last Attack: Liz’s Unique ability applies Shatter damage, which ignores the enemy’s Resistance.  This is useful against the Gray Demon Death Match boss since it is weak to the Shatter effect.

Unique – Easy to Befriend: With Liz’s Unique ability, if all allies are HP attribute heroes in a Death Match, their skill ranks will automatically be increased at the start of the allies’ turn.  This applies once Liz enters battle and can be used only once.

Green Liz can be used with a mono-green team against Bellmoth and the Gray Demon, because her Unique ability increases all allies’ skill ranks at the start of the allies’ turn once she enters battle.  She is particularly useful against the Gray Demon since it is weak to the Shatter effect (which her Ultimate Move is able to apply).  Outside of Death Matches, Green Liz has limited utility.  To ensure that she is best able to stay alive, it is recommended to equip her with HP and/or Defense equipment.

Liz, fully Elizabeth, was a Holy Knight of Danafor and the 106th incarnation of the Goddess Elizabeth. Originally from an enemy nation of Danafor, Liz was saved by Meliodas when her mission in the kingdom failed and was about to be sentenced to death. Liz then spent the remaining of her life in Danafor with her savior and joined the rank of its knightly order, until her death by Fraudrin before the kingdom's complete annihilation.