Draw Hero
Coin Shop
Green Jericho's skill can inflict great damage on its own to a single enemy when used at the right moment. 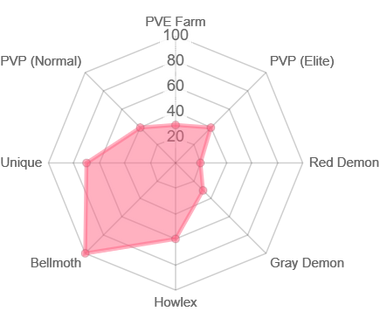 Jericho is the younger sister of Holy Knight Gustav.  When Jericho was younger, Gustav treated her desire to become a Holy Knight herself with a negative response and told her to give up and stop embarrassing him, which resulted in her having a huge chip on her shoulder and a constant drive to prove herself.  She is a very skilled swordswoman and is able to move extremely fast and launch several slashes all at once.  Prior to becoming a Holy Knight, Jericho was an apprentice with the Weird Fangs and was stationed at the Baste Dungeon where Ban was imprisoned.  In an effort to make herself appear stronger and avoid ridicule, she disguised herself as a male.  Ban escaped Baste Dungeon by humiliating Jericho and stripping her down to steal her clothes.  This caused Jericho to hunt him down to seek revenge by drinking demon’s blood to gain powers and greatly increase her powers, and also made her become a member of the New Generation of Holy Knights.  In her demon form, she attacked Gustav and nearly crushed him to death.  Her inner self begged for anyone to stop her, and her demonic exterior gloated in triumph.  Just before Jericho was about to eat Gustav, Gustav pleaded out for anyone to save his sister, which Ban did by removing the strange “plant” that was inside of her.  This caused Jericho to be reverted to normal, thereby losing all of her powers from the demon’s blood.  With Ban having been her savior and preventing her from becoming a full demon, Jericho developed a childlike infatuation with Ban although he regards her as a little sister. During a later battle against the Ten Commandments, Gustav was stabbed by a Holy Knight under Zeldris’s commandment.  Still injured, Gustav used his powers to stop Grayroad from turning Jericho and other captured civilians into demons.  Though he was unable to stop his own death, he was able to buy time for Merlin to step in and save them all.  Upon having watched her brother’s death, Jericho reawakened her powers in a new form, this time revolving around ice manipulation (similar to Gustav’s powers).

Flash Attack: All of Jericho’s skills are based on her storyline skills with her sword.  Her primary attack, Flash Attack, inflicts Weak Point damage on a single-target.  This, when used after her debuff skill, is useful since Weak Point deals increased damage against debuffed enemies.

Flash Strike: This debuff skill not only deals melee damage but also causes enemies to Bleed for two turns after, resulting in additional damage equal to 80% of damage dealt at the end of every turn.  This helps to whittle away at the enemy’s health bar even when Jericho is unable to attack.

Combined Attack - Chain Slash: Jericho has a combined attack when Guila is placed in her Association slot.  This attack is very similar to Silent Split, but the amount of Spike damage that Jericho is able to inflict is increased by 14.3%.  This relationship is due to the pair’s close bonds as they were both training to become Holy Knights.

Unique – Repeated Cuts: Jericho’s Unique ability increases her Crit Chance by 10% per skill that she uses.  Unfortunately, this only works on skills that she uses so her passive does not work from the sub slot.  To best utilize this ability it is recommended to accompany her with support units who can help keep her alive while she continuously uses skills and increases her Crit Chance to deal more melee damage.

Green Jericho is the primary hero to use for the Hell Death Match demon boss Bellmoth because her “Bad Blood” with Bellmoth decreases the boss’ damage dealt by 30% and she is capable of inflicting melee burst damage with both of her attack skills, which is useful because Bellmoth is only damaged by melee attacks.  She can be useful to use against the Gray Demon, although she requires sufficient support units to keep her alive and wait out the demon’s flying so that she can actually damage the boss since it’s immune to melee attacks while it’s in the air, and she is a great damage dealer to use for the Crimson Demon Howlex.

Green Jericho also has some viable usage against a few of the Final Bosses, such as Final Boss King and Final Bosses Elizabeth & Meliodas, because they are Speed attributes and are thus weak to HP attribute heroes.  Another place that Green Jericho can be used is for farming the Speed Attribute Dungeon in Fort Solgres by using her on a mono green team with Green King, Green Elaine and Green Jillian.

Last, but not least, Green Jillian has use in a number of Season 1 and Season 2 Reverse Stages, which can be completed for free Diamonds.  For early-game F2P players, she’s great to use for the Knighthood Boss Kelak because she can be bought from the Coin Shop and can do great melee burst damage against the boss without costing much.

Jericho is part of the New Generation of Holy Knights after drinking the demon's blood. When she was an apprentice, she served the Weird Fangs and was stationed at the Baste Dungeon where Ban was imprisoned.