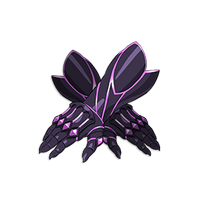 Iori Yagami is a character who made his first appearance in The King of Fighters '95. He is a central recurring character, and the initial enemy (and eventual rival) of Kyo Kusanagi.

He is the heir to one of the three clans that sealed the legendary snake entity, Orochi, 1,800 years ago. His clan, formerly known as the Yasakani, wields pyrokinetic powers. They keep the seal over Orochi intact with help from the Kusanagi and Yata clans using three ancient artifacts. His family's treasure is the Yasakani Jewel and his family crest is the crescent moon, which he wears on the back of his old jacket. He also wears a plain silver ring around his left middle finger; the significance of the ring, if any, is unknown.