Festival Draw
Green Festival Zeldris disables all enemies' Ultimate Moves and, at the end of the turn, uses a Debuff Skill which depletes Ultimate Move Gauges. 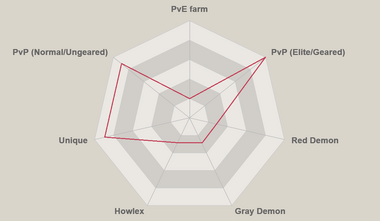 Festival Zeldris was made available on 7DSGC Global with the May 25th, 2021 update.  This version of Zeldris, also known as [Demon King’s Deputy] Executioner Zeldris, bears Zeldris’s second demon mark (which is larger and centered on his forehead rather than over one eye, similar to Assault Mode Meliodas’s second demon mark).  He is the middle brother between Meliodas and Estarossa and is the youngest biological son of the Demon King.  He was responsible for the ransacking of Camelot and the enslavement of its citizens as well as the denizens of Liones.  He resents Meliodas and feels that Meliodas abandoned the demons during the Holy War 3000 years ago.  His Commandment of Piety causes whomever turns their back to Zeldris will become a servant to the Demon King.  As a unit, Festival Zeldris is great at countering opponents in PvP who are trying to Ult Rush because he can decrease their Ultimate Move Gauge orbs through his debuff skill.

Black Road: Zeldris’s attack skill, Black Road, inflicts Cleave damage to a single target.  This attack skill cannot be a Critical Strike, which means that Zeldris’s Commandment will not be activated from his own attacks since his Commandment activates any time that a Critical Strike occurs from a skill use. Half of his Crit Damage will be converted as additional damage from Cleave.

Unique - Scent of Death: Zeldris’s Unique ability is active for all content, which means it can even be applied when he is in the sub slot.  His Unique ability increases all allies’ basic stats by 2% for every Debuff applied on an enemy (max ten times), so it works well when he is paired with units that are able to apply many Debuffs (preferably AOE) on the enemies.

Zeldris can be used for both PvE and PvP, but he excels in PvP.  He can work very well in an Ult Rush Counter team or an Assault Meliodas team as a replacement for Red Zeldris.  In an Ult Rush Counter team he works very well to prevent his enemy from being able to use their Ultimate Moves, and in an Assault Meliodas team, he works well to help give Assault Mode Meliodas an extra boost for his attacks as he’s able to increase all allies’ basic stats by 2% for every Debuff that is applied on the enemy.  When not used on a team with Estarossa, using Estarossa for his Association slot provides the best stat increase as it increases Zeldris’s Crit Damage %.

At the time of release, Zeldris is the first unit to have the Cleave ability, and it works similarly to Zaratras’s passive.  This attack is able to do a fair amount of damage on its own but only to a single target, although perhaps most importantly there is a caveat to the skill that it cannot experience a Critical Strike and thus Zeldris’s Commandment cannot be applied to himself from his own attacks.  For units affected by Zeldris’s Commandment, the reduction to Crit Chance and Crit Damage cannot be cleansed off.

Zeldris is an elite warrior of the Demon Clan, serving directly under the Demon King as the leader and Piety of the Ten Commandments. He is also the younger brother of Meliodas, as well as the youngest son of the Demon King, whom Zeldris also serve as representative and executioner.

According to Meliodas, due to having being lent the magic power of the Demon King, Zeldris' power can equal that of the Demon King and Supreme Deity, and that he has the power to remove the curse on him and Elizabeth.