Draw Hero
Coin Shop
Green Estarossa taunts enemies with his stance skill and counters incoming attacks, making it difficult for the enemy to use attack skills. 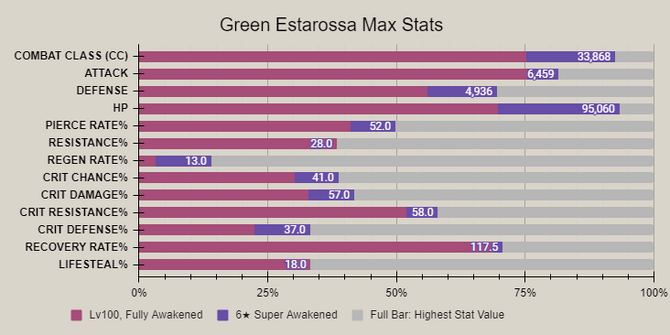 [Elite Demon] Estarossa of Love is a member of the [Ten Commandments].  Estarossa grew up alongside Meliodas and Zeldris and is presumed to be another son of the Demon King.  Similar to Meliodas, he is able to enact Full Counter, which reflects back the force of any physical attack.  The Commandment that is bestowed upon Estarossa by the Demon King is the Commandment of Love, which in the anime renders anyone who has hatred in their heart to be unable to inflict damage unto others.  This aspect of the anime gets translated into Green Estarossa’s Commandment of Love decreasing Attack-related stats by 20% for 3 turns upon damaging an enemy with a skill.

Green Estarossa’s primary attack can deal up to 500% of Attack Charge damage to a single enemy.  This Charge damage will ignore Defense.

Green Estarossa’s Ultimate move, Blackout, performs Preemptive Strike before any allies are attacked, which prevents Ultimate Move Gauge depletion effects and counterattacks before any enemy attacks land.  In doing so, he also inflicts damage on his opponents when taking attacks, and disables all of his target’s skills.

His Unique ability, Courageous Heart, causes all allies to have Debuffs removed any time that he uses his Stance skills (Full Counter or Blackout).  Additionally, allies will become immune to Debuffs for two turns. His Unique ability work even from the sub-slot.

As the Commandment of Love, Green Estarossa’s Commandment causes all heroes in the battle to have Attack-related stats decreased by 20% for three turns whenever they damage the enemies using a skill.  This Commandment does not apply in Death Matches.

Green Estarossa’s primary benefit is in PvP.  He can be used in PvE and has some limited usefulness with the Gray Demon since he is HP-type, but there are better heroes to use for PvE.

Pairing Green Estarossa with Red Derieri and Red Zeldris in PvP, especially ungeared PvP, can be very effective.  This is because Red Derieri is able to deal out increasing amounts of damage with each turn that she uses attacks.  Red Zeldris, on the other hand, increases all allies’ basic stats by 6% for each ally or enemy with a Commandment, which will help with being even more effective in PvP.  In PvP, the one Commandment rule applies, so only the furthest left hero of your team will have his/her Commandment activated.  The next Commandment becomes activated upon the prior hero’s death, so when using a full Commandment team, you will benefit most from utilizing Red Zeldris’s first.

Green Estarossa also makes for a great Counter team when paired with Blue King, Red Gowther, and Green Merlin.  Green Merlin, being in the sub-slot, will help the entire time begin the PvP battle with one additional Ultimate Move Gauge orb.  Red Gowther will be able to rank up Green Estarossa’s skills so that his attacks and Full Counters will be more effective and deal higher amounts of damage.  Blue King, in the meantime, can help with keeping Green Estarossa alive by either healing or petrifying the opponent.

To best optimize the use of Green Estarossa in any team, equip him with Attack and Defense equipment sets.  This will ensure that he is able to inflict significant damage when attacking his opponents using his Full Counter skill.

After absorbing the Commandment of Truth, Estarossa's appearance remains mostly unchanged except that his forearms and legs are covered in darkness, and he gains a spiked circle made of darkness on his back. Once he absorbs the Commandment of Reticence, he transforms for a second time with his entire body covered in darkness similar to that of Meliodas' Assault Mode.

Like all members of the Demon Clan, he is able to manipulate the mysterious jet-black power of darkness for a variety of purposes, such as forming a sphere for battle and wings for flight. His aura, combined with the aura of the other Ten Commandments is so terrifying that it made the normally calm Hendrickson sweat in fear by their presence.