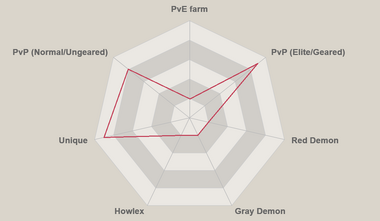 Eastin Amabyllis is an original character that was made specifically for Seven Deadly Sins Grand Cross.  She appears in some of the game’s limited events and is frequently portrayed as an antagonist.  She possesses magical abilities, including but not limited to hydrokinesis.  She is also known as the Ruler of Torrents and is the youngest member of the Seven Disasters at 18 years of age.  She was born as an heiress and member of a noble family, but the people of her world started to fear her magical abilities and so they attempted to murder her by throwing her into the ocean.  She survived this attempt on her life and came to loathe humanity for what they had done to her and she desired to take over her world as revenge against their actions.

Later on, she is summoned to Brittania by Lillia and Valenti to form a group of villains (the Seven Disasters) who are set on killing the Seven Deadly Sins and plan to destroy the world.  Her behavior in combat is typically arrogant and egotistical, and she frequently underestimates her opponents in a manner that can be somewhat detrimental to her.

Vague de Dauphin: This skill translates from French as “wave of dolphin”, and disables the recovery skills for several turns, and at Rank 2 and Rank 3 will even prevent the Ultimate Move Gauge of the enemy from filling up for several turns.  Rank 3 additionally will decrease the enemy’s attack by 20% for three turns.  This move does quite a bit to prevent enemies from being able to Ult Rush, and also prevents them from being able to heal back up after having taken damage.

Ultimate - Triste Fin: French for “sad end”, this skill inflicts AOE Spike damage up to 525% of Attack with max level.  Spike damage does two times the amount of Crit Damage when attacking.

Unique - Beach Girl: Eastin’s Unique ability increases all of her allies’ Pierce Rates, Crit Chances, and Crit Damages by 5% for each Debuff that is applied to her enemies.  This can be used up to eight times in a battle and requires her to be on the field in order to apply.

Green Eastin’s usage is primarily in geared and ungeared PvP although she is more effective in geared PvP.  Her skill and Unique ability do increased amounts of damage upon Debuffed enemies, so she is best used when paired with a unit that can apply multiple Debuffs.  With her Unique ability, she can increase all of her allies’ Pierce Rate, Crit Chance, and Crit Damage by 5% for every Debuff that is applied to her enemies (up to eight times).  One great team to use her with is on a Halloween Roxy Burst team, by using Green Halloween Roxy as the main damage dealer, Red Kyo to inflict Ignite debuffs and amplify the damage of Green Roxy, Green Eastin to amplify Roxy’s Pierce Rate, Crit Chance and Crit Damage with every debuff that Red Kyo applies, and lastly Green Deathpierce in the sub slot to decrease the enemy’s Crit Resistance and Crit Defense for even more damage.  With this team, Roxy’s Unique ability increases her damage for each ally of the same race participating in the battle, so this team takes advantage of that with an all-human team to make the most of her charge ability and allows her to inflict substantial AoE damage.  Another alternative is to use her as a sub DPS because Weak Point and Spike will multiply the damage output once activated.