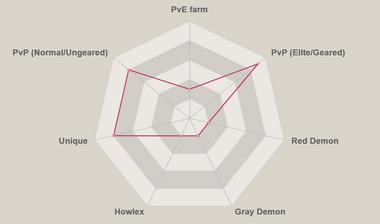 “Creation” Fighter Diane is a small (human-sized) version of Giant Diane.  “Creation” is a reference to her inherent power, which is a power exclusive to those of the Giant Clan since they all possess a deep connection to nature that allows them the ability to manipulate the earth.  The greater a giant’s connection to nature, the greater their Creation ability.  Diane frequently uses her Sacred Treasure, Gideon, to augment the size, range, and destructive power of her attacks.  In the anime, one move that Diane uses frequently with her Creation ability is “Heavy Metal”, in which she converts her entire body to metal, thereby increasing her weight, strength, and durability.  When she is in her giant form she is very slow, but when shrunken down to her human size form, her speed increases dramatically and she is able to dodge attacks much more readily.  Throughout the anime, she has close personal relationships with Elizabeth, King, and Howzer.  Elizabeth is like a best friend, King is someone she has loved for quite some time (although she forgets about it for a period of time), and Howzer is someone who has a crush on Diane and her bubbly personality.

Her Unique ability, Stretch, is what makes her very tanky in PvP.  This ability taunts enemies and creates a barrier equal to 300% of Defense at the start of battle, and applies when she enters battle.  This, combined with her Defense skill “Heavy Metal”, both benefit by equipping her with full Defense equipment.

Green Diane is a very tanky unit due to her Unique ability and Defense-applying skill since she’s able to taunt her enemies and create a barrier equal to 300% of Defense immediately at the start of battle.  By taunting her enemies, she is able to immediately protect her allies from being targeted, which grants them a pseudo-immunity and prevents her allies from being able to get burst, debuffed, or having their Ultimate Move gauges depleted.  She has limited use outside of PvP, and when in PvP she requires specific team compositions that are able to complement her ability effects.  One viable partner to use her with is Green Valenti since Green Valenti serves well on high-Defense teams and also in complementing Pierce composition teams (such as Green Diane’s Ultimate skill).  Another good option to use Green Diane with is Blue Tarmiel, because Blue Tarmiel’s Goddess Grace, the Grace of Ocean, helps to heal back HP based on a percentage of Defense lost when taking damage during the enemy’s turn.  To make the best use of Green Diane as a tank in PvP, equip her with full Defense equipment.

Retrieved from "https://7dsgc.fandom.com/wiki/Green_Diane?oldid=6752"
Community content is available under CC-BY-SA unless otherwise noted.