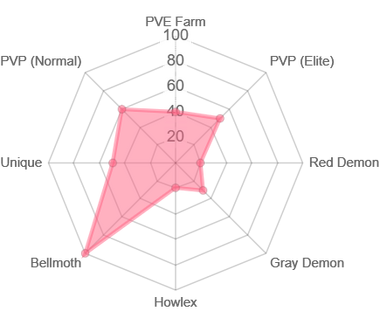 Derieri is an elite warrior of the Demon Clan, and was granted the Commandment of Purity from the Demon King.  She typically has a laid back and nonchalant attitude, and is most often seen accompanied by Monspeet.  She has a deep hatred of Meliodas, Elizabeth, and others from the Goddess Clan due to their part in her sister’s death.  Her and Monspeet have a deep and unspoken love for each other, which is highlighted when he sacrifices his life to protect her.  After Monspeet’s death, Derieri eventually comes to realize that Meliodas and Elizabeth are not the enemies that she had thought they were, and she grows to trust them both as she has nobody else to turn to, and even goes so far as to risk her own life to save Elizabeth from Estarossa.

Ultimate - Combo Star: Green Derieri’s Ultimate Move inflicts Amplify damage on a single enemy.  Amplify damage deals 30% extra damage per active buff that she has on herself.  Unfortunately, unlike other variants of Derieri, Green Derieri is unable to apply buffs on herself to take advantage of her Amplify skill, so she pairs well with other units that can apply buffs to her.

Unique - Selfish Power: Green Derieri’s Unique ability prevents enemies from being able to fill their Ultimate Move gauges by moving skills, and applies as soon as she enters battle.  This is particularly useful because it is a Unique ability and not a Commandment that affects both allies and enemies.