Draw Hero
Green Demon Hendrickson has a debuff attack skill which inflicts damage over time, forcing the enemy into a tough situation. 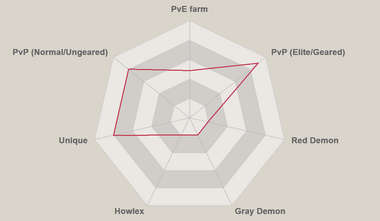 [Ashen Desire] Demon Hendrickson, also known as Green Demon Hendrickson,  is a demonic form of Hendrickson, as he is seen in Episode 72.  In this form, he has mottled skin, demon legs and feet, possessed-looking eyes, large blue-grey horns, and gray wings.  This form of his is created after he consumes Gray Demon’s blood.  Eventually, this form gets replaced after he unseals the Coffin of Darkness and releases the Ten Commandments.

Green Demon Hendrickson was given to players as a free guaranteed unit during the New Year’s Festival from December 29th, 2020 to January 26th, 2021 as long as players completed seven tasks given by the Seven Deadly Sins.  He could also be acquired by spending diamonds on the Happy New Year Survey Draw, which had featured Green Demon Hendrickson and Blue New Wings King.

One downside of character is that he has limited costumes available other than his evolution and Affinity costumes.

Green Demon Hendrickson’s Unique ability is particularly useful for his attacks, as well as any other allies that are able to deal attacks with Debuff skills.  This is because his Unique ability increases allies’ damage dealt with Debuff Attack skills by 50% (except for during Death Matches).  This makes his attacks even more useful, especially in PvP, due to his AoE Debuff skills.

[Ashen Desire Hendrickson] is best utilized in PvP.  He accompanies well with Blue New Wings King since the latter’s Unique ability makes enemies unable to be able to remove Debuffs from themselves if they have two or more Poison, Bleed, Shock or Corrosion Debuffs applied (and Hendrickson is able to apply both Bleed and Shock Debuffs).  Furthermore, if three or more of the aforementioned Debuffs are applied, Blue New Wings King’s Unique ability decreases one orb from the enemy’s Ultimate Move Gauge at the end of the allies’ turn.  As a result, using Hendrickson’s Debuffs as early as possible when he is paired with Blue New Wings King helps to gain a competitive advantage in PvP.

When gearing Green Demon Hendrickson for geared PvP, it is recommended to either use HP gear to ensure longer-term survivability or to use Attack + Crit Damage gear to increase the damage dealt by his attack cards.  As mentioned in the above Skill Review, Green Demon Hendrickson’s AoE Debuffs are enhanced by his Unique ability increasing the damage dealt by all allies’ Debuff Attack skills by 50%.

For Associations, Meliodas will help increase the Attack dealt, and Elizabeth can help to better assure survivability.  All Associations with Green Demon Hendrickson and their associated stats are listed in the table below:

Hendrickson is a former Great Holy Knight of the Liones Kingdom alongside his lifelong friend, Dreyfus. He is responsible for the creation of the Reactor-class Holy Knights that threatened the peace of the kingdom. He is also the main antagonist of the Holy Knights Saga.