[The Pleiades of the Azure Sky] Holy Knight Deathpierce 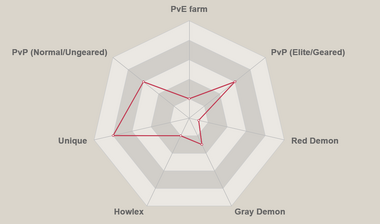 Deathpierce is a member of the Pleiades of the Azure Sky, an order of the Holy Knights of Liones.  All of his abilities have some relation to music, as his primary ability is Melody, which allows him to control the rhythm and flow of magic similarly to a song, and allows him to delay magical attacks by a considerable amount.  This ability makes any offensive magic that is used before him completely redundant and is used to control the movement of magic around him to cause attacks from others to veer off course.

Originally from Edinburgh, at some point during his youth Deathpierce befriended a small fairy who is invisible to everyone but himself, so he names her Invisible.  After the fall of Edinburgh, he was recruited by the Assistant Great Holy Knight, Denzel Liones, to join the Pleiades of the Azure Sky.  As with many of the other Holy Knights. Deathpierce has an uncomfortable relationship with both Grandmaster Hendrickson and Grandmaster Dreyfus due to the actions both made during the Holy War and the Pleiades of the Azure Sky having been sent away to guard the borders of the kingdom.

During the New Holy War, when the Four Archangels formed an alliance with Liones to face the Demon Clan, Ludociel used Breath of Bless on all of the present members of the Pleiades of the Azure Sky.  This gave them an immediate power boost, but also simultaneously brainwashed them into being Ludociel’s pawns.  They formed part of the Search-and-Destroy Force that was sent out to face the Demon Clan army and clear a path to Camelot.  After the conclusion of the battle with the Demon Clan, Elizabeth explained to Deathpierce that Breath of Bless is also known as Cheat Hope, which would push a person’s magical and physical capabilities to their limits, but the person would lose their feelings of pain and tiredness and continue to fight to their deaths.  Sariel then explained that Elizabeth had spent much of the battle healing everyone’s injuries and speaking with the Demons to ignore Chandler and Cusack’s orders and turn back around and avoid the fight.

18 months after the end of the Holy War, Deathpierce opted to resign from the Pleiades of the Azure Sky and retire from being a Holy Knight.  After having experienced the tragedies resulting from the demons and goddesses’ he feels he cannot live in a kingdom that is ruled by a demon and a goddess and so he decided to return to his homeland of Edinburgh and dedicate his life to restoring the area and building a kingdom exclusively for humans.

Grandioso: The Italian word for “great”, grandioso is used in music to describe playing in a grand or majestic style.  This skill inflicts Shatter damage (which ignores the enemy’s Resistance) on a single enemy.

Ultimate - Brillante: The Italian word for “brilliant”, brillante in music is used to describe playing in a bright or sparkling manner.  This move will inflict damage up to 450% of Attack on all enemies at maxed Ultimate level.  It also decreases the Attack-related stats by 30% for three turns.

By and large, the best use for Green Deathpierce is to place him in the sub slot -- he’s extremely useful in this way for PvP and also for the Tower of Trials, as long as you are confident in your primary three members surviving.  He’s not useful for content where all four members are on the battlefield at the same time (such as Knighthood boss), since he doesn’t have the best survivability.  The reason that he works great in the sub slot is that his passive reduces enemies’ crit resistance and crit defense, which in turn provides an increase to your allies’ crit chance and crit damage.  He works great with heavy damage-dealers, such as “The One” Escanor or Red Sariel for this reason, because he can help to ensure that “The One” always lands a Critical Strike.

Deathpierce was originally from Edinburgh, where at some point during his youth he befriends a small fairy who he named Invisible due to her being invisible to everyone but himself.

After the fall of Edinburgh, he was recruited by Denzel Liones and joined the Pleiades of the Azure Sky order of Holy Knights of Liones.

Retrieved from "https://7dsgc.fandom.com/wiki/Green_Deathpierce?oldid=7179"
Community content is available under CC-BY-SA unless otherwise noted.