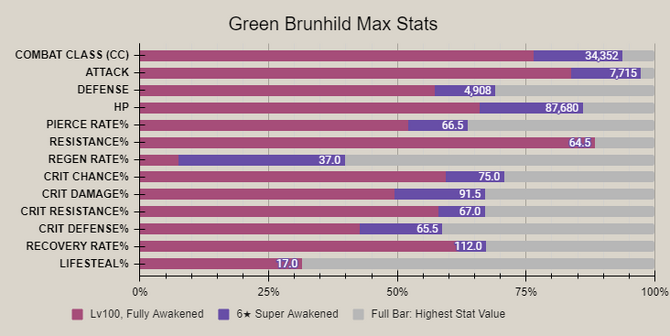 Princess Brunhild is a 7DSGC original character, introduced during Ragnarok Chapter 2. As the princess of Isenstein and leader of the Isenstein Legion, Brunhild is revered as being wise, beautiful, and brave. She married into the role after falling in love with the country’s sovereign prince, Prince Gunnar. Prince Gunnar, however, was not a healthy man and passed away shortly after they were wed. This left Princess Brunhild to rule the country alone, carrying on her dead husband’s duties and continuing to protect the kingdom. Due to her beauty, combat skills, and kind demeanor to her people, rumors were spread around Isenstein that Brunhild was a heaven-sent goddess.

She has a combative relationship with Prince Sigurd of Xantenburg. Xantenburg and Isenstein are at war, a war so extreme that the Xantenburg soldiers refer to Princess Brunhild as the Goddess of Death. Additionally, she does not get along with Priest Vali, as she feels that the teachings of Odinism do not allow the death of innocent civilians and while she is willing to fight on his behalf, fighting is meant for warriors only.

Later, [The Seven Deadly Sins] encountered Brunhild’s beaten-down men in the Northernmost Plains. It is revealed by Brunhild’s man Hagen that the Isenstein Legion was conscripted to support Priest Vali’s expeditionary force as a vanguard role. During their battle, Brunhild realized that the attack would be meaningless and stayed by herself to fight the giants and buy time for her soldiers’ retreat. Elizabeth and Hawk found Princess Brunhild and healed her, but this does not stop the continued animosity from the princess.

Nimble Spear -  Princess Brunhild’s first attack skill, Nimble Spear, inflicts a Detonate effect. This is particularly effective against bosses with high Ultimate Move Gauges because Brunhild is able to deal increased 15% more damage per orb in the target’s Ultimate Move Gauge. This allows her to have high damage potential against bosses like Hraesvelgr because they have 7 orbs in their Ult Gauge compared to the usual 5.

Stab Rush - Brunhild’s second attack skill, Stab Rush, is similar to Red Sariel’s Power Strike, which deals additional damage that is equal to the enemy’s Resistance. This is useful against bosses that have high Resistance as it increases the amount of damage that Brunhild can deliver.

Unique: Spear of Victory - One of the best aspects of Princess Brunhild is her Unique ability.

However, a major downside of this Unique ability is that it does not apply in PvP or in Death Matches. With Brunhild’s Unique ability, she experiences a 12% increase in her basic stats for every surviving ally, and an 8% increase of all stats every time an ally dies. These stat increases can greatly increase the amount of damage that she can inflict.

Green Brunhild’s optimal use is to beat Hraesvelgr. There are a few team configurations that work well with Green Brunhild, with her serving as the primary damage dealer. Pairing her with Festival Ludociel or Green Princess Elizabeth as a healer can help to keep her alive. Red Halloween Matrona, Green Diane, or Blue Derieri can be used for their Taunt skill. Lastly, either Green Halloween Gowther or Red Halloween Gowther can be used in the fourth slot as a support unit.

Floor 1 of Hraesvelgr can be farmed with Green Brunhild on a team with Blue Festival Ludociel, Green Halloween or Red Gowther, and Green Princess Elizabeth as support. This team is only viable if your units are high enough CC to clear the floor on their own already.

Since she is an HP unit, Green Brunhild can be used on Hell difficulty of Bellmoth despite her Unique ability not applying. A good team to use with her is Green Halloween Gowther, Green Liz of Danafor, and Green Allioni. Another good team to use for Bellmoth is to use her with Green Halloween Gowther, Green Helbram, and Green Allioni. With both of these configurations, Green Brunhild’s Detonate skill is great if you can stall and let the target’s Ultimate Move Gauge fill up, as she deals 20% additional damage per orb in their Ultimate Move Gauge. Her Power Strike card also does a heavy amount of damage, which is increased with higher enemy Resistance.

Brunhild is an original character made for the Ragnarok saga of The Seven Deadly Sins: Grand Cross mobile game.

She is a princess who protects Isenstein and is often referred to as the "Goddess of Death" by the soldiers of Xantenburg.