Festival Draw
Green "Assault Mode" Meliodas uses and Attack Skill with the Amplify effect, which deals great damage depending on the number of Buff effects on him. 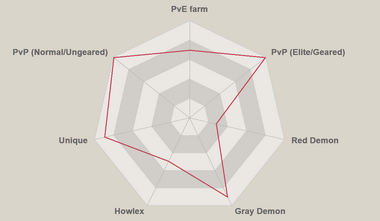 Green “Assault Mode” Meliodas, also known as "Assault Meli" or Berserk Meliodas, is an HP-attribute demon form of Meliodas who was released on Global as a festival unit on March 16th, 2021 immediately after “The One” Escanor’s festival banner ended.  This demon form of Meliodas is his “original” form, as the older brother of Estarossa and Zeldris.  As the first son of the Demon King, Meliodas is renowned as the most powerful demon alive and was originally bestowed the Commandment of Love and was projected to be the next Demon King.

However, he fell in love with the Goddess Elizabeth and chose her over his affiliation with the demon clan.  In doing so, he abandoned his post as the leader of the Ten Commandments and gave up his own Commandment.  Though he did participate in the Holy War, he fought on the side of the Goddess Clan and their allies (the Giants, the Fairies, and the Humans), as part of Stigma until Drole and Gloxinia defected.  Towards the end of the Holy War, the Demon King (Meliodas’s father) and the Supreme Deity (Elizabeth’s mother) tragically teamed up together to punish Meliodas and Elizabeth for their defiance.

Both Meliodas and Elizabeth were killed, however, the Supreme Deity cursed Meliodas with Immortality and the Demon King cursed Elizabeth with Perpetual Reincarnation.  This caused Meliodas to revive every time that he died, and also caused his emotions to consume him more and more until he would return to the bloodthirsty demon that he once had been.  Elizabeth, on the other hand, was forced to live out human lives over and over again during which she would reunite with Meliodas and die right in front of his eyes each time.  Throughout his many reincarnations, Meliodas eventually became the leader of the Seven Deadly Sins and became known as the Dragon Sin of Wrath.

1000 Divine Cuts: This skill does AOE Rupture damage, with 100%, 150%, and 250% of Attack respectively for each card rank.  Rupture damage does double the amount of damage against Buffed enemies.

Dark Sword:  This skill does single-target Amplify damage equal to 180%, 270%, and 450% of Attack respectively for each card rank.  Amplify damage does an additional 30% damage per active Buff on himself.

Ultimate - Dark Pressure: “Assault Mode” Meliodas’s Ultimate ability increases his own basic stats by 50% for three turns, and then immediately inflicts damage up to 525% (at max level) of Attack on all enemies.  This, in combination with the buff he obtains from his Unique ability, allows him to deal impressive amounts of AOE damage.

Unique - Forgotten Past: “Assault Mode” Meliodas’s Unique ability is one of his best assets when it comes to PvP.  When he is used on a team where all of the allies are Demons and/or those with Commandments, then his passive increases his own stats by 5% and decreases the Defense-related stats of all enemies by 15% for two turns each turn that an ally takes damage.  Note that this passive is only able to apply up to five times, but in that time he’s able to deal substantial debuffs to his opponent.

At the time of his release, "Assault Mode" Meliodas’s Ultimate is one of the best, if not the best, in the game.  His Ultimate is a similar one to Galland’s (both Red and Blue variants) but he’s able to attack all enemies at once rather than only a single target as Galland is limited.  When buffed up he is able to deal an insane amount of damage, so using Ult food to Ult Rush and push to get your Ult used first is a great tactic to use in PvP when using "Assault Mode" Meliodas.

To make the most of his passive, "Assault Mode" Meliodas should be used with allies that are all Demons or those with Commandments.  In PvP, using Red Melascula can help to absorb the hits and prevent one-hit take-outs for Meliodas due to her passive.  Alternatively, pairing "Assault Mode" Meliodas with Red Zeldris in PvP can help to counter Ult Rush teams and prevent them from being able to take Meliodas out as quickly.  Other good Commandments to use for PvP are Green Derieri and Blue Drole.