Affection is earned for each Hero, regardless of their Attribute.  Affection can be increased by winning battles with Heroes, having conversations with them in the Tavern or in villages, or presenting them with gifts.  Rewards are earned for filling Affection hearts.  The maximum number of hearts increases with the number of Heroes owned, as well as the maximum level of Affinity amongst the individual Heroes.

Most Heroes have other Heroes that they have an Association relationship with.  When the Association Hero is used in the supporting slot, the primary Hero will get extra boosts. 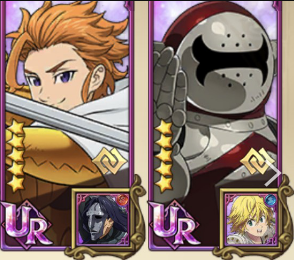 Additionally, some of these Associations provide the ability to perform combination attacks (also sometimes referred to as Fate Combos).  These will typically be based on the relationships the Heroes have with each other from the anime and will have different animations from normal for the Ultimate Move. 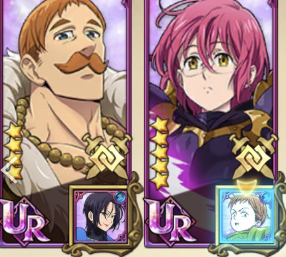 Heroes can be Awakened to increase their Combat Class.  Awakening Materials required will vary based on the initial grade and attribute of each Hero.

Each Hero has a variety of Costumes that can be unlocked, which give boosts to the Hero when in combat.  A maximum of five Costumes of each type can be equipped at a given time, and the boosts are additive.  The three categories of Costumes are Outfit, Weapon, and Cosmetic.  These can be bought through the Sacred Treasure Shop, by Limit Breaking Heroes, or by maxing out Affinity for a given Hero.

Understanding the various types of stats will help with selecting which stats are optimal to capitalize on when awakening equipment and determining which equipment sets are most appropriate for each Hero.  Each equipment set has its own overall set bonus, and each type of equipment has various stats that are available, as can be seen on the Equipment tables.

Attack is a value showing the amount of damage that is dealt.

Defense is a value which decreases the damage that is taken when attacked.

Critical chance is a value which increases the critical strike chance.

Critical damage is a value which increases the critical strike damage.

Critical defense is a value which decreases the critical strike damage from an incoming attack.  This is the opposite of critical damage.

Critical resistance is a value which decreases the critical strike chance of an incoming attack.  This is the opposite of critical chance.

HP is a value showing how much damage a Hero can take.

Lifesteal is a value which absorbs a portion of damage dealt as HP.

Pierce rate is a value that deals a fixed damage amount that is equal to a portion of the damage that is dealt.

Recovery rate is a value of increased HP gain when recovering.

Regeneration rate is a value which recovers a portion of lost HP every set number of turns.

Resistance is a fixed value that represents defense against a portion of damage that is taken.

Damage dealt +30% per active Buff on self.

20% increased damage per Debuff on the target.

20% additional damage per orb in the target’s Ultimate Move Gauge.

Becomes immune to Ultimate Move Gauge reduction effects and attacks before the enemy does.

Increases damage dealt by 30% per Debuff on the target and removes Debuffs.

When attacked, counterattack inflicting damage based on your Attack.

When attacked, counterattack inflicting damage based on your diminished HP.

Immune to damage from Attack Skills.

Decreases the target’s stats and increases its own stats by the same amount.

Only damaged by ranged attacks.

Inflicts damage back to the attacker.

Additional Recovery equal to 60% of recovered HP at the start of every turn.

Removes all Ult Gauge of units who attack the caster.

Directs all attacks to self.

Additional damage equal to 80% of damage dealt at the end of every turn.

Additional damage at the end of every turn.

Additional 100% of the damage done at the end of x turns.

Incapacitates target.  Effect is removed when target is attacked.  This is particularly useful when fighting the Red Demon Death Match.

Decreases the target’s Max HP and recovers own HP by the amount decreased one.

Incapacitates target and removes all buffs and debuffs.  Attack is removed when target is attacked.  This is also very useful for the Red Demon Death Match, similar to Freeze.

Additional damage equal to 50% of damage dealt at the end of every turn.

Additional damage equal to 30% of damage dealt at the end of every turn.