Some special events are recurring. Though new units may be released that perform better against event bosses, the general strategies for each event remain the same.

There are three main styles of event bosses:

Lamek can be beaten fairly easily with any of the recommended PvP teams. This battle requires finding a partner (in standard Death Match fashion), but as long as both players bring in high DPS units these battles can be cleared fairly quickly.

The best team to use against Purinpu is one built around Green “Assault Mode” Meliodas. With this team, Meliodas should be used with other Demons to make use of his passive ability. Some good Demons to pair with Meliodas in this composition are Blue Festival Cusack, Blue Chandler, Green Festival Zeldris or Red Zeldris, and Green Estarossa. 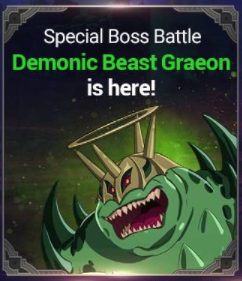 Demonic Beast Graeon relies heavily on his buffs and can be a little annoying as he stacks his passive. A great team to use against Graeon is Blue “The One” Escanor and Red Derieri (or other high DPS units) paired with Red Slater or Green Princess Elizabeth (or another unit that can cleanse the boss’s buffs).

Some event bosses work like Final Bosses, which require repeated battles to farm currency, which can be spent in the event shop to purchase items.

Ult Rush teams work well against Malek to get through his defenses quickly and take him down. During the first phase, concentrate on filling Ultimate Move Gauges and killing the boss as the level can move on without killing the minions. During the second phase, release Ultimate Moves to kill the boss at the start of the level. He will revive himself and then will need to be killed one final time. A viable farming team for this boss is Red Derieri, Red Kyo, Blue Goddess Elizabeth, and Blue King.

Gloom can be beaten fairly easily with a high DPS team, such as utilizing The One Escanor or Red Sariel. Almost any viable PvP team can be used against Gloom.

Aboru, Galland’s nephew, can be beaten with a team built around Red Sariel and Red Gowther. Focus on ranking up Sariel’s skills and building his Ultimate. Use Green Merlin in the sub slot and Ult food to ensure a speedy run. 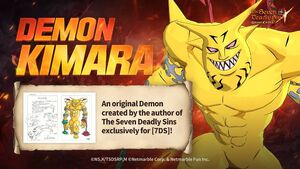 Beating Kimara is most easily done with a combination of a damage dealer, a healer, a unit to disable debuffs, and a unit to disable attacks. The typical team to use against Kimara is Blue Eren, Red Slater, Red Gowther, and Blue Lillia, but other team compositions are also viable.

Baruja can be farmed with a team of heavy hitters and using Ult Food to Ult Rush the boss. Below are some viable team compositions: 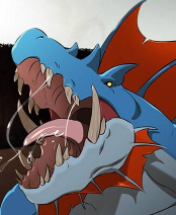 Crockshell, the Silent Bog boss, is unique because it utilizes a tag team battle structure. In this format, two teams of three are set and can be swapped out during the battle. To beat Crockshell, it is best to bring units with Ignite and Shatter effects. Some viable units to use against this boss with Ignite effects are Green Escanor, Red Demon Meliodas, Red Guila, Red Melascula, Red Kyo, and Green Cain.  Some recommended units to use with the Shatter effect are King (Blue, Red, or Green), Green Liz of Danafor, Red Rem, and Green Zaratras. 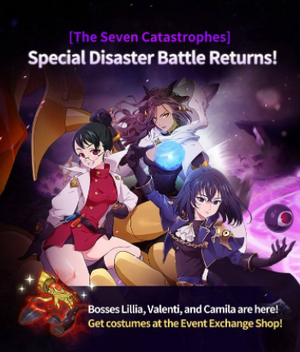 Disaster battles use characters from [The Seven Catastrophes]. These three bosses are:

Each boss allows up to two players to fight together in a Death Match-style battle. Typically, during releases of these battles, each boss can be fought up to twice per day for a chance to acquire exchange shop currency and rewards.